Manny Pacquiao in relaxed, nostalgic mood in first day as a 'retired boxer'

LAS VEGAS - For someone who has devoted more than half of his life to boxing, Manny Pacquiao said he'll definitely miss fighting and everything about the sport that has defined him as a person.

Pacquiao said it won't be easy detaching himself from the daily grind of boxing that became his life the moment he aspired to escape poverty in his native General Santos City and gambled in the Big City as a gangling teener.

It was the morning after his unanimous decision win against Tim Bradley at the MGM Grand and his first day as a retired boxer - the fight against the American boxer being the last in an exemplary career adorned by titles in eight different weight categories.

Pacquiao said he felt good, having started his day by attending the regular Sunday service at the Michael Jackson Theater inside the Mandalay Bay Delano.

"First day ng buhay retired," a relaxed, smiling Pacquiao said in the receiving area of his suite at the 60th floor of the posh hotel along the famous Vegas strip.

The red mark just below his left eye remains visible, a reminder of the brutal war he went through against Bradley just the night before.

Yet despite the cruelty of the sport, there is still a throbbing pain he feels deep inside him about finally walking away from boxing.

"Oo naman (malulungkot ako)," he said, adding that most of his boxing gloves and paraphernalias had already been given away. 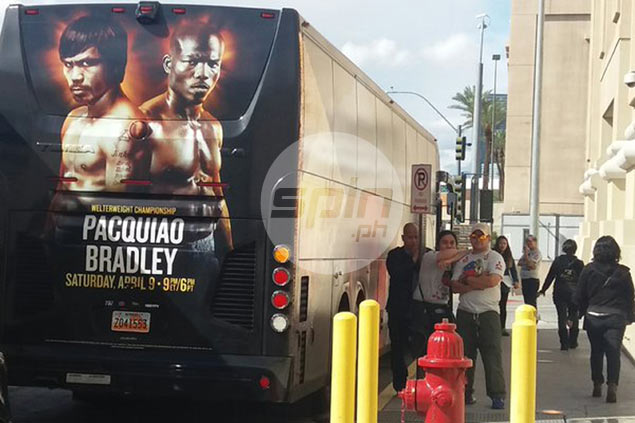 There were no formal goodbyes between him and longtime trainer Freddie Roach, who became more of a father figure to him than the man who transformed him into the legendary fighter the world has come to know.

The Filipino boxing hero said he only has good memories from the 15 years they spent together which boxer and trainer tried to recall during their final days in training for the Bradley fight.

In a way, Pacquiao, 37, won't leave boxing completely as he intends to help other fighters as chief of his own MP Promotions, even in the event he assumes a higher public office should he win a Senate seat in the coming Philippine elections.

But even coming from the man himself, everybody knows there will never be another Manny Pacquiao.