AirAsia on Tuesday surprised Manila-bound guests on board flight Z2782 from Cebu - an Airbus A320 bearing the Pacquiao livery - by giving away passes to the viewing party for the fight aside from souvenir items.

“Sobrang masaya kami,” said the 42-year-old Catherine, who works part-time at a rattan factory in Talisay.

Both will watch the fight at New Cebu Coliseum, one of the venues that are part of the nationwide viewing party.

On top of the free tickets, AirAsia PH has been offering promotional fares for as low as P399 for one way (base fare only) to/from Manila, Cebu, Kalibo (Boracay), Tagbilaran (Bohol), Tacloban, Puerto Princesa (Palawan), Davao, Cagayan de Oro, and to international destinations Hong Kong, Macau, Incheon (Seoul), Kuala Lumpur, and Kota Kinabalu for guests traveling from June 15 to October 15 this year.

Booking period is until Sunday or on fight day.

“In his (Pacquiao) honor, we have painted our aircraft with his name and face, offer promotional low fares, and we are giving away free viewing party passes to his much-awaited match,” AirAsia Philippines CEO Joy Cañeba said. 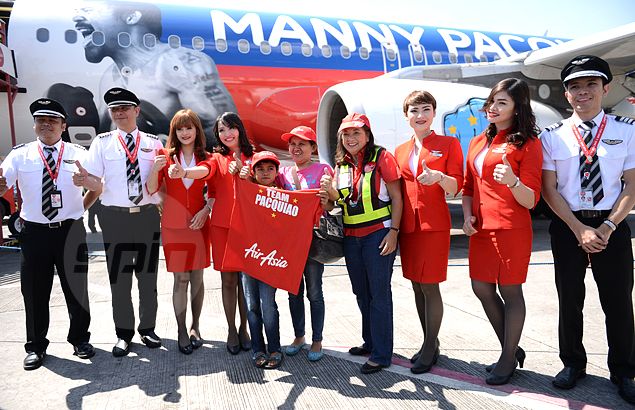