Shortly after the session was adjourned at 5 p.m., the boxing hero immediately proceeded to the nearby Elorde Boxing Gym at the 5 E-Comm Center inside the SM Mall of Asia grounds for his second day of training for his November 5 fight against WBO welterweight champion Jesse Vargas.

After a four-month layoff, the 37-year old former pound for pound king was seen complaining of stomach cramps once in a while.

The eight-division world boxing champion bared that he will devote enough time for training without compromising his work at the Senate.

After his boxing training, Pacquiao was not yet ready to cap his day as he was to proceed to the Azure Gym in Sucat, Paranaque to join his Senate Defenders basketball team’s practice for the UNTV Cup.

While most of his staffers already asked for permission to go home after his boxing training, Pacquiao says he still has energy left to play basketball.m 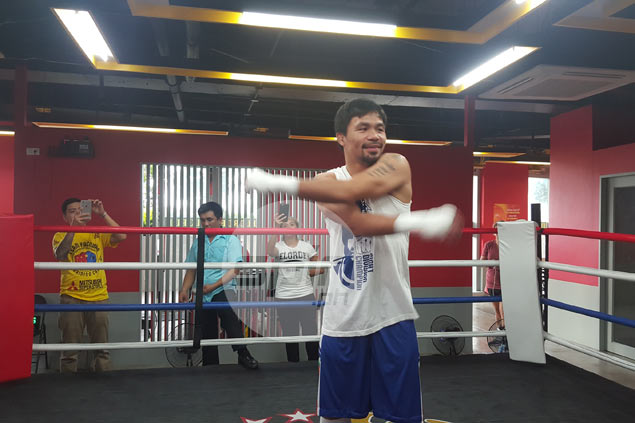 Unfortunately for Pacquiao, the Senate basketball team called off practice at the last minute as most of his teammates, which includes fellow Senators Joel Villanueva and Sonny Angara, were exhausted from the day’s long hearing.

Being a senator, boxer and basketball player at the same time, Pacquiao was asked what is his priority and forte.

The soft-spoken solon also bared that he is relishing his Senate stint and happy to craft laws that will better the lives of Filipinos. He has already filed two Senate bills: The death penalty re-imposition on drug peddlers and the re-enactment of the Philippine Sports Commission law and functions.