Former world champ Luisito Espinosa back on his feet
by gabalvarado | Oct 18, 2018

AT age 48, a decade and a half removed from his glory years in the ring, and now tipping the scales at lightheavyweight, Luisito Espinosa is back in the gym and loving it.

The two-time world champion is not getting ready to rumble again. Sure, his feet are still nimble, his punches crisp and his ring moves silky smooth as ever. But fighting belongs to the past, buried together with most of the personal turmoil that had left this proud warrior heartbroken and broke.

It’s interesting what a change of scenery can do. From America, where he struggled to make a living as a carpet cleaner and warehouse store stocker, among others, Luisito was lured to Hong Kong last October by the promise of a job close to his heart. He doesn’t have to do any fighting, he was told; all he needs to do is teach others how. His energy is now focused on this new-found calling.

It's mitts session in one of Luisito's classes at the Mong Kok gym of Everlast Fight and Fitness, where he is head boxing coach to a group of amateurs and new learners. On this Friday afternoon, he has three of his more serious and promising students with him. Their brief is to throw voluminous left-right-left-right combinations before shifting positions and firing punches again. The work is serious but the atmosphere loose, as a barefoot Luisito puts his students through their paces. His voice is like a jab, unrelenting and firm – but always friendly. Playfully, he pushes them to give more whenever he sees their energy slipping. When a student’s shoulders finally sag from the exertions, he calls on the next one to join him in the ring. And the drill continues.

Luisito smiles and laughs a lot. He likes poking fun at his students. So unlike the serious, no-nonsense champion fans have come to know from looking at old photos of him.

Luisito at work is a joy to watch. He’s loose, full of energy and banter. He radiates happiness. Like a kid who has just received a shiny red bike for his birthday.

The mitts session lasts two hours, non-stop – and it’s just the start of a hectic half-day. Shortly after, he’s hurrying to the MTR Station to take the train to Causeway Bay, where another group of five students, including two Filipinos, are waiting for him at the main Everlast gym.

Luisito knew nothing about Hong Kong when first offered a job in the territory so he was reluctant to come. And few in this city more familiar with mixed martial arts and Thai kickboxing had ever heard of the Tondo-born ex-champ.

“I'm not sure if he will come because he's a world champion. Why will he come here?’’ says his boss Joey Chan, the Everlast licensee for Hong Kong and China. “He always says, ‘Oh, I don’t want to come’ . . . But finally he came. The clients like him for sure. Everybody wants to train with a champion.”

“First time I saw him, I don’t know this guy,’’ says Lawrence Chow, one of Luisito’s students who’s in the retail business. “He’s very good. Then I saw him on YouTube, he’s very famous . . . I learn a lot from him. He’s really a good master, so I will continue training with Louie.’’

Estranged from his family after a bitter split with his wife, and abandoned by former associates, Luisito has found a surrogate family in Hong Kong. His students and the Everlast staff are clearly fond of him. And why not? He’s easy to get along with and mostly cheerful, a characteristic valued highly by Hongkongers.

At the end of the Mong Kok session, one of his students hands Luisito a brand-new black gym bag as a gift. The grateful mentor bows his head repeatedly to the young man and crams his old backpack into the bag. He then straps this on his back before leaving for his next class.

To Luisito, life in Hong Kong is an oasis after his struggles in America.

BEFORE Manny Pacquiao shot to worldwide fame and became the Pambansang Kamao, Luisito reigned as Philippine boxing icon with quiet grace and class.

The legend of King Louie was born when he won the WBA bantamweight crown with a stunning first-round knockout of Thai champion Khaokor Galaxy in Bangkok in 1989. After losing the title to Israel Contreras two years later, Luisito bounced back and took the WBC featherweight title from Mexican Manuel Medina in 1995. This time his reign lasted longer – seven successful title defenses in all.

Quick hands, excellent footwork, a knockout punch and efficient jab – the rangy Luisito used them all to devastating effect. He had ring presence and boxing savvy. Going to enemy territory – to places like Mexico, Thailand, Japan, South Korea and the US – was never a problem for him.

Trash talking was never his thing. Respect for his opponents and the fight game has always been part of Luisito’s DNA. He was flamboyant inside the ring, but never outside of it.

There’s a unique Espinosa experience that Pacquiao, for all his immense wealth and boxing achievements, may never enjoy before he retires: two outdoor world title bouts against Mexican opponents at the Luneta before passionately cheering countrymen. Those fights were proof, if there was ever any doubt, of Luisito’s exalted status as People’s Champion – an honor that Pacquiao would, deservedly, enjoy some years later. 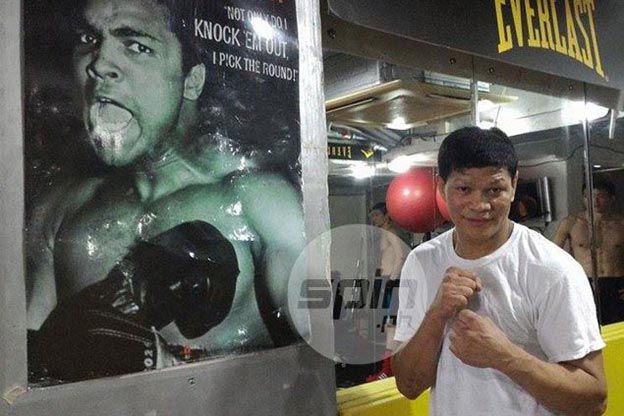 Sadly, it was in another outdoor title fight, against Argentine Carlos Rios in Koronadal, South Cotabato, in 1997, where a victorious Luisito would come away empty-handed: his US$150,000 purse was never paid. Nearly 18 years on, he is still waiting to collect his money from promoters.

His mood appears to swing from hopelessness to hope to hopelessness again, when pressed on the issue of the unpaid purse – one that has consumed him for more than a third of his life. A recent Court of Appeals ruling in his favor, however, could mean that his long battle for just pay might not be in vain.

That fight was to be King Louie’s last in his own country.

After two more successful title defenses, he suffered controversial losses to Cesar Soto and Guty Espadas, snapping a six-year unbeaten run. Except for a handful of good outings, it was downhill from there. Luisito would never again scale the heights of his ‘90s reign. Towards the end, his career was marked by brutal knockout defeats, managerial disputes and concern among his supporters for his health and well-being as he continued to fight well past his prime to make a living.

His plight is enough to drive a man to the pit of despair, but God-fearing Luisito – to use a boxing idiom – rolled with the punches. Unlike other washed-up fighters who turn to drink and drugs in retirement, Luisito continued to live like a boxer in training mode. He led a spartan life and made an honest living with his hands.

There’s plenty of sympathy for Luisito among netizens and admirers saddened by his life story. But one in particular, PsychShrink, cast Luisito and his legacy in an entirely new light when commenting in a thread about the fallen champion on Niketalk in 2006.

“I don’t think you should feel sorry for him at all, but see him as a kind of inspiration though not in the traditional sense,’’ wrote the netizen, who introduced himself as a psychologist.

“This was a guy who fell from a very high perch and he could have used that as an excuse to give up or lose himself in depression but he didn’t let it beat him or crush his spirit . . . I could see the strength of character he had.

“It’s easy to be all smiles when life is good and all the stations are featuring you and giving you props, but you find out what you’re made of when life hits you with adversity. That’s a real fighter for you.”

IT'S TEMPTING to imagine what life would have been for Luisito had he come after Manny Pacquiao – instead of the other way around.

Certainly there’s greater appreciation for Filipino boxers since Pacman’s success story. In this friendlier atmosphere, a fighter of Luisito’s remarkable talent and discipline undoubtedly would have flourished even more.

Maybe Freddie Roach would have taken him under his wings and made him an even better fighter. Maybe Bob Arum’s Top Rank and Oscar De La Hoya’s Golden Boy Promotions would have tried to beat each other in signing him.

Perhaps he’d be a ton richer and his career a tad longer.

At the very least, Luisito won’t step into the ring and walk away from it without prize money.

To see the divergent paths the careers of Luisito and the Pacman took in the past decade and a half, consider these:

He learned about this slice of shared history, he adds, only after he saw a program of that infamous fight when the Pacman was already a world champion.

The two champions would meet several times in the US, where the Pacman regularly fights, with Luisito a beneficiary of Pacquiao’s generosity. Luisito even tells of the time the eight-division world champion helped alleviate a hearing problem he’s had since childhood.

The Pacman’s legendary speed and punching power have always left Luisito in awe. “Next time gagayahin ko yung ginagawa nya.’’ He says this with a smile, but it’s hard to know if he’s joking or indeed planning to learn new tricks at his age.

THERE'S a young woman, a lovely Davaoena, who makes Luisito’s heart beat fast these days. The two met through a mutual friend in Manila, when Luisito was there for a visit sometime ago.

Since his failed marriage, Luisito admits he’s been into a string of relationships, including one that bore a son, now seven. Though all of them ended in heartbreak, Luisito is proving as fearless in love as he was inside the ring: he just keeps on looking for the right one, never mind the emotional scars and bruises left by each affair gone wrong.

“Sana siya na talaga,’’ he says of his new love.

The long-distance nature of the relationship is a source of frustration for Luisito, but they’re both giving it a chance. One-and-a-half year into their relationship, the couple is already planning for a future together.

IF HIS his current good fortune holds, Luisito hopes to realize his dream of building a boxing gym in Manila and be his own boss. His aim is to train future world-beaters, like how his late father Dio schooled him in the art of fighting. 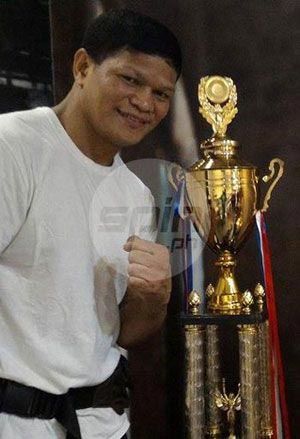 Despite holding a rewarding job at the moment, Luisito’s fight for a better life is far from won. Looking at this happy, child-like figure, one can’t help but fear what another storm in his personal life could do to the fragile future Luisito is trying to build for himself and his new love. Misfortune has knocked him down so many times it would be heartbreaking if life surprises him again with a cruel blow. He seems oblivious to this possibility, though.

Light on his feet in that mirror-panelled gym, a smile on his face as he dares his students to hit the mitts harder, Luisito is every bit a happy warrior. The bitter past is a world away, the future seemingly just within a jab's reach.

It’s hard not to root for this champion.