Down for the count, ex-world boxing champ Jaro back on his feet after hitting Eat Bulaga! jackpot

IT was one of those rare moments when former world boxing champion Sonny ‘Boy’ Jaro received a hefty purse without throwing a single punch.

Jaro was picked the lucky winner in Eat Bulaga’s popular ‘Juan For All, All For Juan’ segment on Tuesday when the long-running noontime show visited Angono, Rizal, where the one-time World Boxing Council (WBC) flyweight title-holder is currently based.

Now 36 and clearly over the hill, Jaro continues to earn a living fighting in the ring as he admitted on national TV that he failed to save for the rainy days, especially after his astonishing sixth-round upset of the legendary Pongsaklek Wonjongkam in Chonburi, Thailand six years ago.

Like most world boxing champions before him, Jaro has lost most of his earnings by giving them away to relatives and friends, leaving him with almost nothing in the end.

Upon learning of Jaro's sad plight, the popular noontime show gifted Jaro with close to P150,000 in cash and prizes, including P80,000 courtesy of the program itself outside of the usual prizes and giveaways regularly handed out by sponsors in the segment.

The money is definitely a big help to Jaro and his family (two kids), although in his prime, he earned much more than that.

He received the biggest prize money of his career during the first defense of his WBC crown against Japanese Toshiyuki Igarashi, four months after stunning Wonjongkam. Jaro received $100,000 (around P5 million as per current exchange rates) after losing the fight via split decision in Saitama, Japan.

Obviously, not much of that sum was left as Jaro's family was left to live in a cramped apartment that he pays for P3,000 a month. 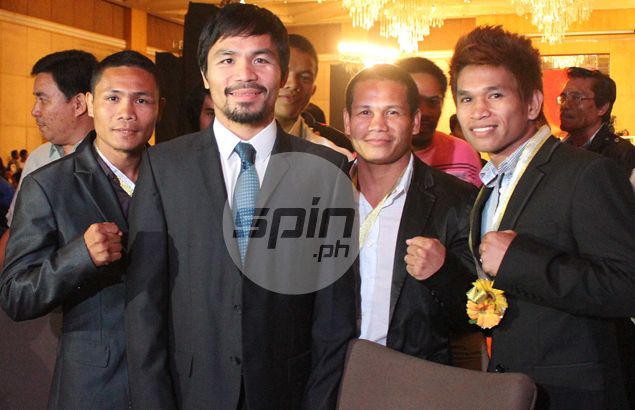 Sonny Boy Jaro with Manny Pacquiao and Donnie Nietes back in 2014. Jerome Ascano

When things turned bad, the Silay City native grew so desperate he sold his championship belt for $1,000 in order to provide for the needs of his family.

“May kaibigan kasi ako na may kilalang Hapon na mahilig mangolekta ng mga title belts,” said Jaro, adding with a tinge of regret that someone later approached him offering thrice the price ($3,000) for the same item.

Until losing his last fight against Jonas Sultan in May of 2017, Jaro was on an eight-fight winning streak to raise his record to 42-14, with 30 KOs.

He previously fought for two world titles, but lost on both occasions to Edgar Sosa (WBC light-flyweight champion) in 2008, and to Giovanni Segura (World Boxing Association light-flyweight titlist) in 2009.

Jaro said he wants to hang up his gloves, but circumstances have left him with no choice but to fight on to be able to make ends meet.

And what’s his advice to upcoming fighters especially those who have a potential to become a world champion like him?