Davis (24-0, 23 KOs) stunned Santa Cruz with a pair of left-handed hooks to the side of the head in to set up the final blow. With Santa Cruz retreating to his own corner, Davis delivered a left-handed uppercut to the jaw that dropped Santa Cruz immediately. Referee Rafael Ramos immediately stopped the bout 2:40 into the sixthwith Santa Cruz unconscious with his right leg bent behind him.

Santa Cruz (37-2-1) remained unconscious for a few minutes before rising with assistance and smiling while sitting on a stool to acknowledge that he was fine. 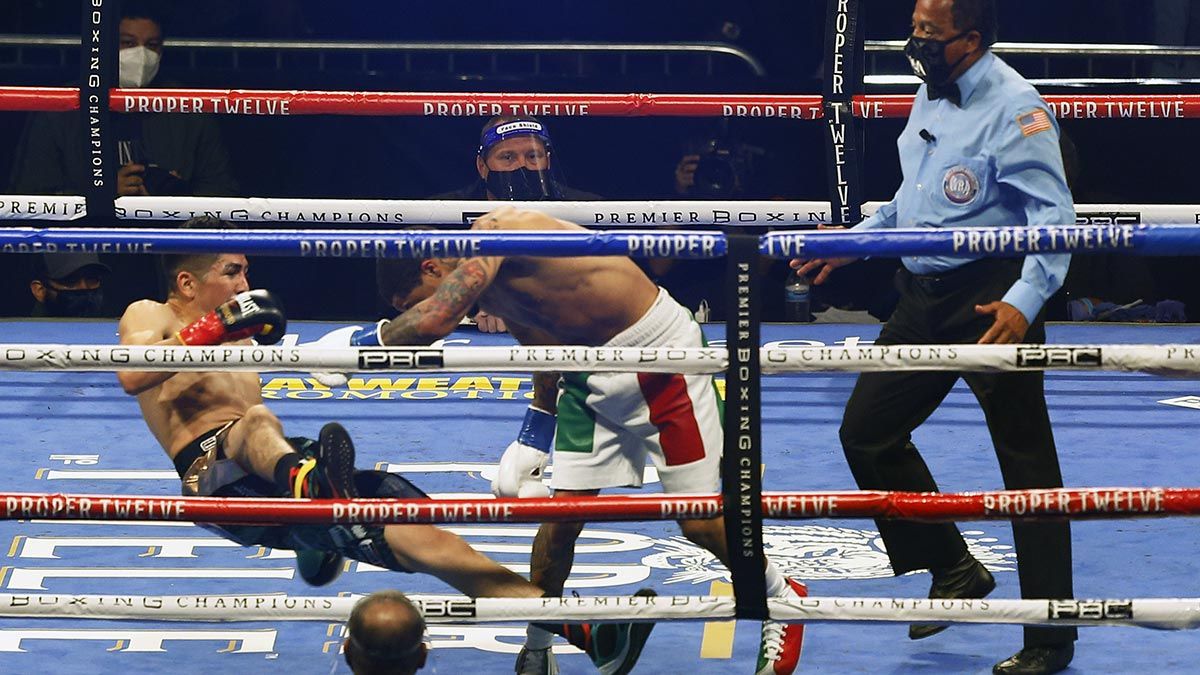 Santa Cruz suffered his own slip early in the second round, which led to Ramos cautioning Davis. The warning upset Davis and fueled Santa Cruz.

Santa Cruz became the aggressor in the third round following his early success.

Davis responded in the fourth round with a series of heavy blows to the head that seemed to stun Santa Cruz and slowed him early in the round. Santa Cruz would rally late with an overhand right straight to the nose that caused Davis to take a couple of steps back to gather himself.

Santa Cruz suffered a low blow with 1:21 remaining in the sixth round, which Davis protested. This time the warning fueled Davis, who staggered Santa Cruz with two left hooks to the side of Barrios’ temple. Santa Cruz smiled after the first left hook, but Davis charged at him and delivered another left hook before ending the bout with a left uppercut.

In the co-main event, Mario Barrios retained his WBA super lightweight championship with a sixth-round knockout against Ryan Karl before a hometown crowd at the Alamodome.

The bouts were part of the first major boxing card with a live audience since the Coronavirus pandemic shuttered all sports drew 9,024 fans to the Alamodome. Seating was limited to 11,000 due to social distancing at the 72,000-seat facility.

The heavy blows in each fight rang through the cavernous stadium with so few fans in attendance.

Due to the pandemic, Barrios had not fought since winning the then vacant title Sept. 28, 2019 against Batyr Akhmedov. The lay-off resulted in a sluggish start for Barrios in his first title defense, but found his pace beginning in the fifth round.

A right hook to the jaw dropped Karl early in the sixth round and his situation grew worse after suffering a deep cut to the middle of his forehead after butting heads with Barrios. With blood streaming down his face, Karl took a series of heavy blows to the head before referee Luis Pabon stopped the bout 2:23 into the sixth round.

Houston’s Regis Prograis, who knocked out Juan Hernandez in the second round of their super lightweight bout prior to Karl’s defeat, declared he wants to fight Barrios next for the WBA super lightweight championship.