BY rediscovering the thrill of a brutal knockout, Anthony Joshua cleared the way to a shot at being the undisputed heavyweight champion of the world.

With a big right hand that sent Kubrat Pulev, a durable but one-dimensional Bulgarian, to the canvas for a third and final time, Joshua secured a dominant ninth-round win in his UK homecoming on Saturday to retain the WBA, WBO and IBF belts.

It wasn't long before the inevitable question was thrown at him: is WBC champion Tyson Fury next in what would be an all-British blockbuster to unify the four titles in boxing's marquee division?

"Whoever has got the belt, I'd love to compete with them," Joshua said. "If that is Tyson Fury, let it be Tyson Fury."

If that felt a slightly non-committal response — and it was taken that way by Fury in a video message he released moments later — Joshua's promoter, Eddie Hearn, left no room for debate.

"We know what we have to do starting from tomorrow: to make the Tyson Fury fight straightaway," Hearn said, a big grin on his face.

"It's the only fight to be made in boxing. It's the biggest fight in boxing."

An agreement in principle has already been reached on a two-fight deal between the two Britons for 2021. It just needed Joshua to dispatch Pulev in the first defense of his titles since regaining them in a rematch Andy Ruiz Jr. in Saudi Arabia a year ago.

He did so in impressive fashion, mixing patience with his renowned power to subdue and then dismantle Pulev in front of the first crowd for a British boxing fight since the coronavirus outbreak. Only 1,000 spectators — a number that included boxing royalty in Floyd Mayweather — were allowed inside London's Wembley Arena because of government restrictions on the amount of people allowed into sporting events, and they witnessed a one-sided fight.

After sizing up Pulev by taking a cautious approach in the opening two rounds, Joshua went on the attack in the third and made his 39-year-old opponent stumble with a right hook that saw Pulev stagger to the corner and turn his back, forcing an eight-count.

Pulev smiled at Joshua, but was soon sliding down the ropes and onto the canvas after a flurry of punches that ended with a fierce right uppercut by Joshua. 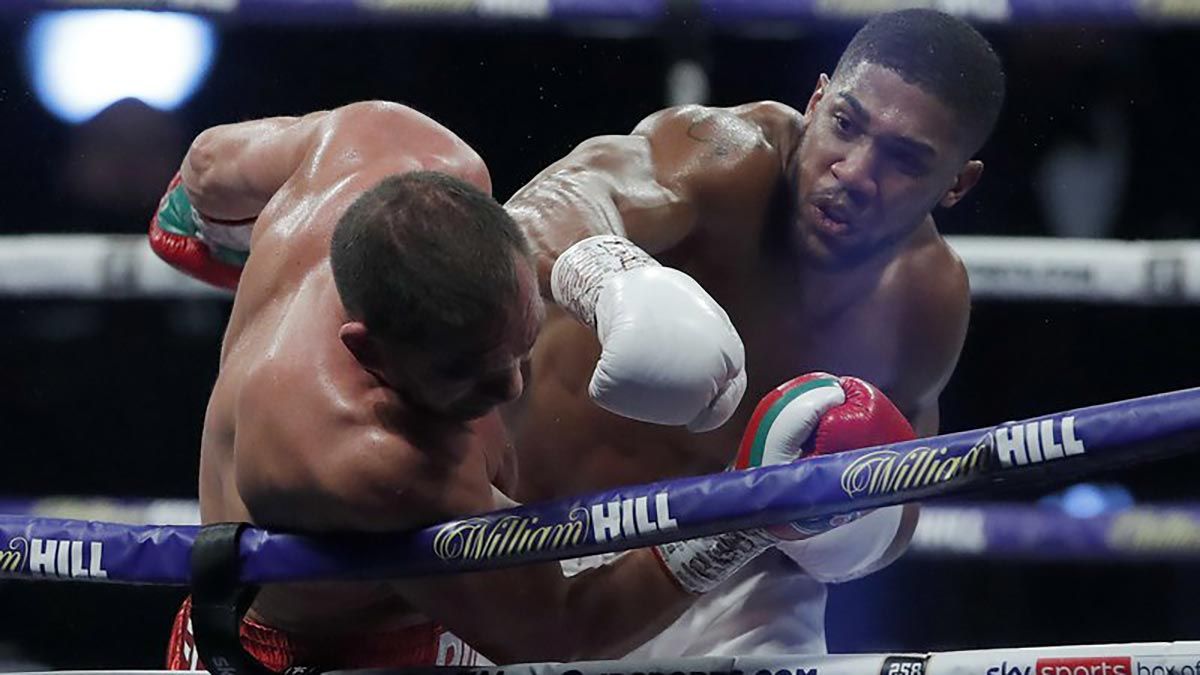 Pulev got up and showed resolve to stay in a fight he was always behind in, with Joshua intent on picking the right moment and not leave himself open.

Joshua always had the measure of Pulev, using the left jab and his longer reach to great effect and hurting Pulev with repeated uppercuts that quickly became his go-to punch.

It was the right uppercut that knocked Pulev down again near the end of the ninth round. The end was nigh for Pulev, who got up but walked right onto a huge right hand that sent him shuddering to the canvas.

The fight was stopped with two seconds to go in the round, Pulev was beaten for only the second time in his career after a 2014 stoppage by Wladimir Klitschko, and Joshua raised his right arm into the air to celebrate his 24th win in 25 fights since turning professional after winning Olympic gold in 2012.

It was Joshua's first knockout since he last fought in Britain, against Alexander Povetkin in September 2018, and it was brutal power punch when it came.

The last heavyweight boxer to be undisputed champion was Lennox Lewis — another to fight under the British flag — in 1999.

Joshua was hardly forthcoming in calling out Fury in his post-fight comments, preferring instead to thank the crowd and the British people for their support in a tough year.

"Since I came into this game in 2013, I have been chasing all the belts," Joshua said. "I have been dealing with mandatories. Of course I want the challenge — it's not about the opponent, it's about the legacy and the belts."

It was left to Fury to deliver the trash-talk in an expletive-laden video message he uploaded on Twitter, saying Joshua "went around the bushes" when asked if he wanted to the fight.

"I want the fight, I want the fight next," said Fury, who was wearing a Christmas sweater for the occasion. "I'll knock him out inside three rounds."

Fury's US promoter, Bob Arum, said he'd start Monday on working to put the fight together.

"It looks like the stage is set," he tweeted, "for the biggest heavyweight championship fight since Ali-Frazier in 1971."