LOS ANGELES – If Floyd Mayweather Sr. thinks Manny Pacquiao is just an 'ordinary guy,' Freddie Roach Floyd believes Floyd Jr. is nowhere the great fighter that he claims to be.

Despite his clean record of 47-0 (26 KOs) and a claim to being the best pound-for-pound fighter in the world today, Roach said he is not awed by Mayweather's accomplishments, or even his claim that he’s a better fighter than legendary champions Muhammad Ali and Sugar Ray Robinson.

”I’m not thrilled with him. I don’t think he’s a great fighter. I don’t judge him as a great fighter. No, he’s not,” Roach stressed on Tuesday after going six rounds with Pacquiao on the mitts and having the Filipino southpaw spar for eight rounds at the Wild Card gym here less than two weeks before he fights Mayweather Jr.

The fighting words of Pacquiao’s longtime trainer came after Floyd Sr. declared from their training camp in Las Vegas that the Pacman is just an opponent in another ordinary fight for his unbeaten son.

[See Floyd Sr. on Pacquiao: 'Were not fighting a Cassius Clay; we're fighting an ordinary guy']

Roach wouldn’t take Mayweather Sr.'s words sitting down as he fired back, taking aim at Floyd Jr and his unbeaten record. 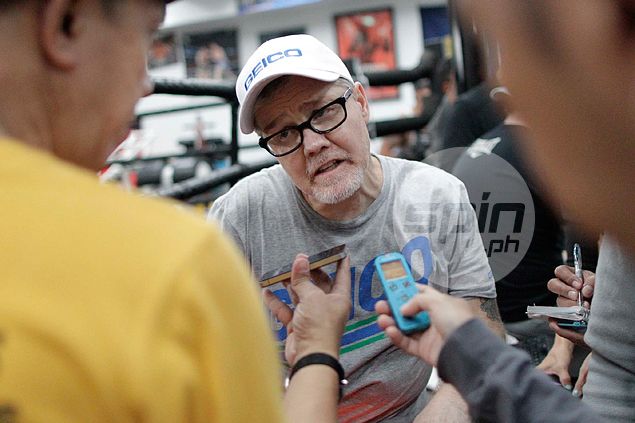 “We have losing record, but you know what, we learned from our losses. You don’t learn from wins,” he added. “He hasn’t progressed at all, He’s the same fighter he was when he started.”

Roach went on and disclosed he and Pacquiao are not afraid of losing, since he said those “things happen” because “that’s part of boxing.”

But the seven-time Trainer of the Year ended it by saying, “Floyd will find that out real soon.”