THE top Filipino coach who worked the corners of Leopoldo Serrantes and brothers Roel and Mansueto Velasco when they won Olympic medals for the country is gone.

Often referred to as ‘Master’ by fellow coaches and boxers who trained under him during his time as national coach of the old Amateur Boxing Association of the Philippines (ABAP), Caliwan is best remembered as the man who trained Serrantes and the Velasco brothers when they won Olympic medals successively from 1988 to 1996.

Caliwan was in the corner of Serrantes when he snared the bronze in the men’s light-flyweight division of the 1988 Seoul Olympiad, ending a 24-year medal drought for the Philippines in the Summer Games. 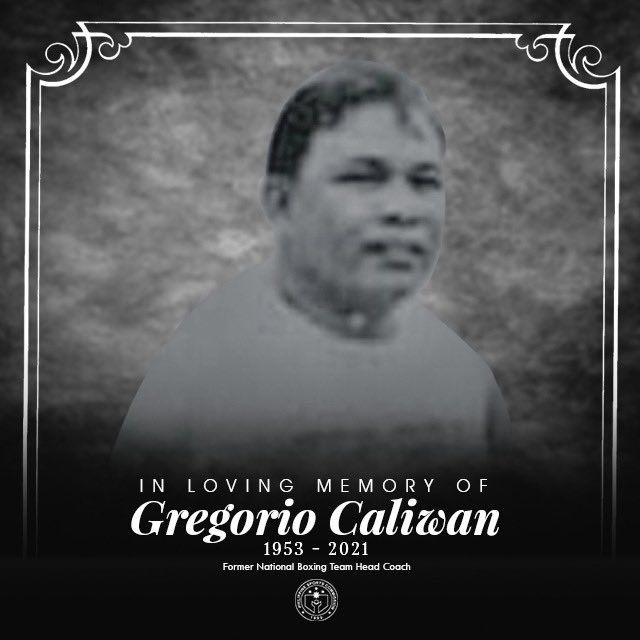 Four years later in Barcelona, he and Nolito ‘Boy’ Velasco guided Roel Velasco to another bronze finish in the same weight division.

It was in 1996 that Caliwan reached the apex of his coaching career as together with Boy Velasco and Cuban coach Raul Liranza Fernandez, they steered Onyok Velasco to a silver medal finish in the light-flyweight class of the Atlanta Olympics, duplicating the feat accomplished by fellow boxer Anthony Villanueva during the 1964 edition of the Olympiad in Tokyo, Japan.

No Filipino boxer has come close to winning a medal after that.

Caliwan had his final stint with the national team in 2004 when Harry Tanamor, Violito Payla, Romeo Brin, and Christopher Camat clinched berths to the Athens Olympics, but no one among them advanced past the round-of-16.

His success was not limited to the Olympics though.

Again with Boy Velasco assisting him, Filipino boxers won three gold medals in the 1994 Asian Games in Hiroshima, Japan courtesy of Onyok Velasco (light-flyweight), Elias Recaido (flyweight), and Reynaldo Galido (light-welterweight) – a feat which until now stands as the most number of Asiad gold medals the Philippine boxing team ever won.

During the 1991 Southeast Asian Games in Manila, the boxing team led by Onyok Velasco and Roberto Jalnaiz won a record eight gold medals, which would be duplicated 14 years later by another Filipino squad bannered by Tanamor and Joan Tipon in the return of the biennial meet here in the country.

Following his stint with ABAP, Caliwan served as coach of the Chinese national team for a long while, and upon his return to the country, focused on discovering talent in the grassroots level as the one in-charge of the boxing program of former Gov. Raul Daza in Catarman, Northern Samar.

Incidentally, Caliwan was the second former member of ABAP to pass away the past few weeks after lightweight Genebert Basadre, who won a gold medal in the 2005 SEA Games.

Basadre and Caliwan worked together during the 2004 Olympic Qualifying Tournament in Karachi, Pakistan.