Nietes was dominant throughout the 12-round match, gamely putting on a boxing clinic against his badly-outclassed opponent from Mexico.

The former two-time world champion from Murcia, Negros Occidental scored a shutout on all three judges’ scorecards, who all saw the bout at 120-108.

The main fight of Pinoy Pride 38 marks the first time the 33-year-old Nietes fought at 112 lbs. in his bid to win another world crown in a higher division. He was actually going after the IBF and World Boxing Association (WBA) titles of Mexican Juan Estrada, who unfortunately relinquished both belts as he also moved up in weight just days before the Nietes-Sosa match.

Still, Nietes said he plans to stay at flyweight and give himself a shot for the vacant titles. He improved to 39-1-4, with 22 KOs.

He didn’t have trouble in his first bout as a flyweight, proving to be the better fighter than the 37-year-old Sosa, the former WBC light-flyweight title holder.

Sosa obviously was no longer the fierce warrior he once was who’s now in the twilight of a career that spawned more than a decade.

But that shouldn’t take the victory away from Nietes, who staggered the native of Mexico City twice, including one in the 10th round when the Filipino landed a solid punch straight in the face that forced Sosa to clinch and avoid an onslaught from `Ahas.’

Two other Filipinos who fought as part of the main undercards of the event presented by ALA Promotions and ABS-CBN Sports, also fashioned out contrasting victories.

Arthur Villanueva hacked out an impressive technical knockout win against Mexican Juan Jimenez in a rematch of their controversial fight in Bacolod City four months ago.

Villanueva left no doubt who’s the clear winner this time as his overhand right perfectly landed on the jaw of Jimenez for the knockout punch from which the Mexican never recovered.

The referee waved off the fight at the 2:20 mark of the second round.

Villanueva is now 30-1 with 16 KOs and has won his last three matches since his failed bid to win the International Boxing Federation (IBF) super flyweight title against McJoe Arroyo of Puerto Rico.

Mark Magsayo on the other hand, kept his perfect record at 15-0 (6 KOs) after pummeling last-minute replacement Ramiro Robles of Mexico in 12 rounds of their featherweight bout.

It was the first fight for Magsayo following his sixth round technical knockout win over former world title conteder Chris Avalos.

Magsayo pulled off the dramatic victory after he was knocked down by Avalos in the third round, marking the first time in his pro career that he was sent to the canvas. 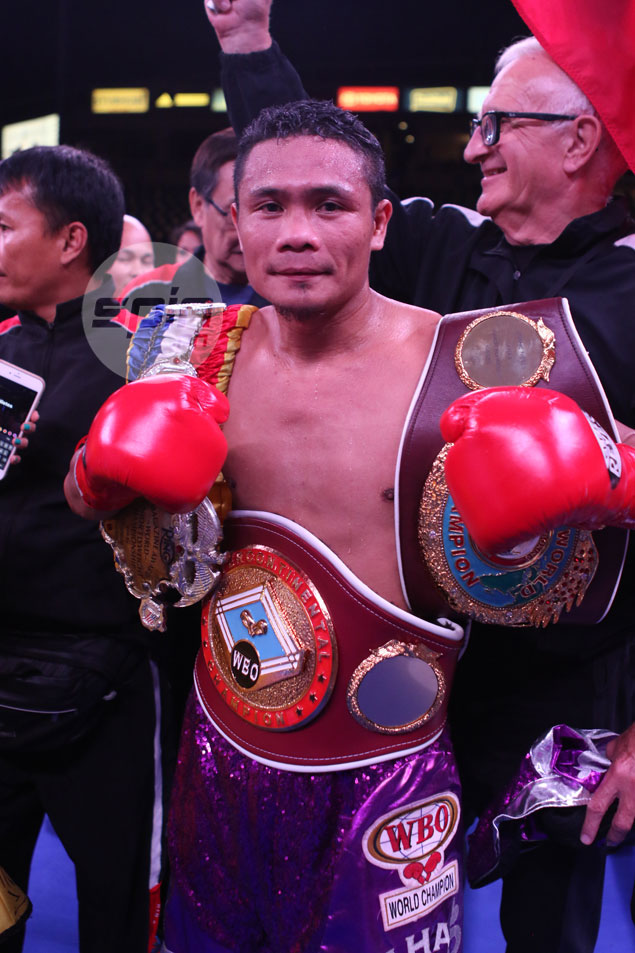