NONITO Donaire puts his WBC bantamweight crown on the line Sunday (Manila time) against fellow Filipino Reymart Gaballo in a mandatory defense he hopes will be a springboard to a bigger fight he’s eyeing next year.

Donaire, 39, looked ready for his first title defense of the crown he won over Nordine Oubaali of France seven months ago, easily tipping the scale at 117.2 lbs. during the official weigh-in on Saturday and hardly struggled making the weight since returning to bantamweight in 2018.

While he’s not underestimating Gaballo, 14 years younger than the champion, Donaire has always been vocal about his goal of earning a rematch against undefeated Japanese Naoya Inoue, considered the best bantamweight in the world today.

And a statement win against his Filipino challenger at the Dignity Health Sports Park in Carson, California will definitely have Donaire lining up for a possible unification match against the 26-year-old Inoue by 2022.

“For me, after the Naoya Inoue fight, I saw that I still had a purpose in this sport. I came strong against Nordine Oubaali in my last fight because I have that purpose. That purpose is to become undisputed champion of the world,” said the Filipino Flash. 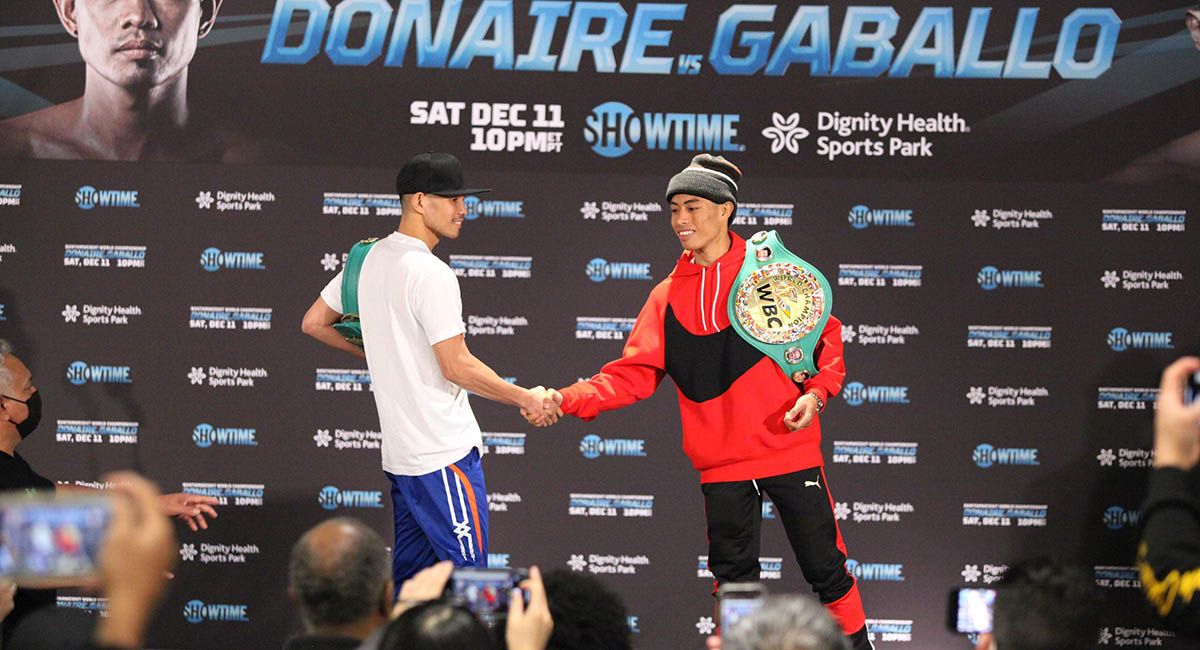 Donaire (41-6, 27 KOs) lost to Inoue by unanimous decision in a highly-competitive fight prior to the pandemic.

But proving there’s still some gas left in the tank, Donaire bounced back strong in his last fight, scoring an impressive 4th round stoppage of Oubaali last May to become the oldest bantamweight champion in history.

The victory certainly gives Donaire the confidence against his unbeaten challenger, not to mention the tons of experience he has in his war chest accumulated through 20 years of sharing the ring with some of the sports finest fighters.

“I’ve faced a lot of top guys with great power like Gaballo has. My experience allows me to have no fear of the power,” he said. “We’re just focused on our strategy and how I can take advantage of his style.”

The soft-spoken Gaballo (24-0, 20 KOs) said he’ll just do everything he can to keep at par with an opponent who he considers as his idol.

“This is going to be a very good fight, and I’m going to do everything that I can to make sure that my hand is raised after the final bell rings,” he said.

Gaballo’s biggest win in his seven year career came at the expense of former world champion Emmanuel Rodriguez of Puerto Rico, who the Filipino beat via split decision last year for the interim WBC bantamweight crown.

Ray Corona serves as the third man on the ring, while the three judges scoring the title bout are Max DeLuca, Karen Holderfield, and Lou Moret.

In the undercard, former world champion Marlon Tapales squares off against Hiraoki Teshigawara in a 12-round IBF super-bantamweight eliminator fight.

Both the Filipino and Japanese came in at 121.6 lbs.