THE COVID-19 pandemic just knocked out ALA Boxing.

For so long the country’s leading boxing promotion, the Cebu-based stable that has been home to former world champions Donnie ‘Ahas’ Nietes and Milan Melindo, along with world title challengers Rey 'Boom Boom,' Jonas Sultan, Z Gorres, AJ 'Bazooka' Banal, Arthur Villanueva, Genesis Servania, and the legendary Edito Villamor decided to close shop after 35 long years due to the effects of the worldwide pandemic.

The boxing promotion and gym owned by the father and son tandem of Tony and Michael Aldeguer announced the sad news in an official statement on Tuesday, citing the pandemic as well as the closure of longtime television partner ABS-CBN. 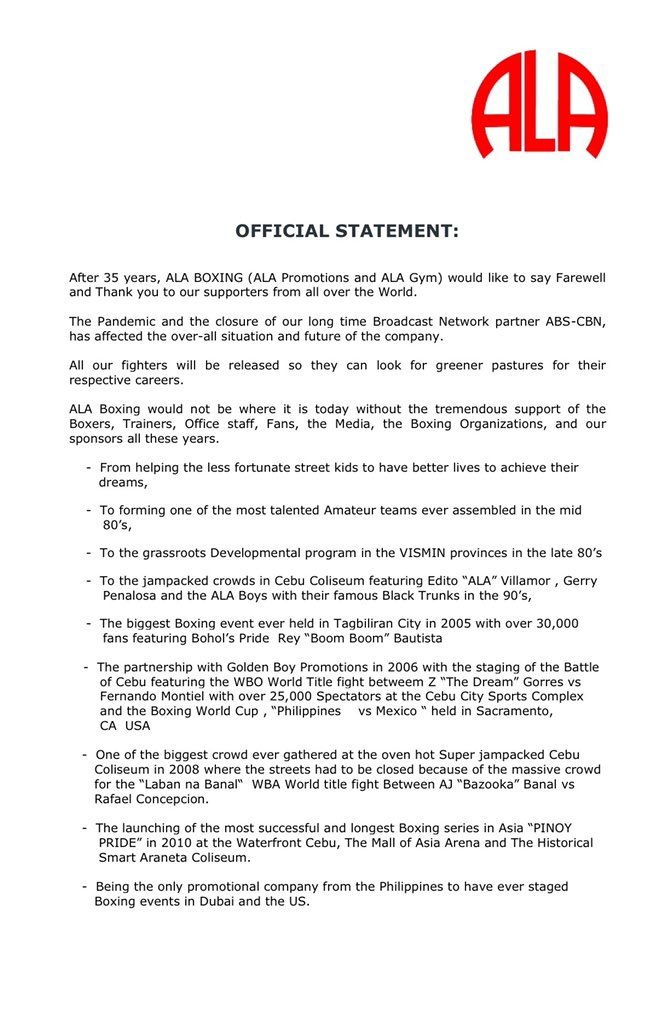 “The pandemic and closure of our long time broadcast network partner ABS-CBN has affected the overall situation and future of the company,” part of the statement read.

"All our fighters will be released so they can look for greener pastures for their respective careers."

ALA Boxing was first established in 1985.

Other boxers who became prominent under ALA boxing included Mark Magsayo, the Pagara brothers, Albert and Jason Pagara, and Jeo Santisima.

ALA Promotions was also responsible for putting up some of the biggest fights in Philippine boxing history such as the 2007 title fight between Gorres and Fernando Montiel for the World Boxing Organization (WBO) super-flyweight crown before some 25,000 spectators at the Cebu City Sports Complex.

It likewise promoted Nonito Donaire's defense of his WBO super-bantamweight crown against Zsolt Bedak in 2016 and witnessed by a crowd of 20,000 also at the Cebu Sports Complex.

But it was the 38-year-old Nietes who became the biggest star of the ALA stable as he became the longest Filipino world champion in history and only the third fighter from the country to win titles in four weight classes after the legendary Manny Pacquiao and Donaire.

ALA boxing also co-promoted fights with Golden Boy Promotions and Top Rank, while staging boxing events overseas in Dubai and in Carson, California.

The promotions is known, too, for holding the longest boxing series in Asia known as Pinoy Pride, which run from 2010 to 2019.

"All these memorable events and accomplishments would not have been possible without all of you. The past and present ALA boxers, trainers, office staff, media, fans, boxing organizations, sponsors, and our boxing family from all over the world," said ALA boxing in the same statement.

"We would like to thank you all very much from the bottom of our hearts for all your support the past 35 memorable years. We cannot ask for more."