IT’S hard to say what is more startling, seeing Mike Tyson hitting a bong or watching him hitting the mitts in a boxing gym like he was getting ready to fight Evander Holyfield again.

Videos of both can be found online, mostly because Tyson is as good as promoting himself in his second career as he was knocking guys silly in his first.

Here's hoping the former heavyweight champion is aware there's a big difference between the two activities.

Because while smoking copious amounts of marijuana probably won't kill him, getting back in the ring at the age of 53 just might.

Tyson hasn't announced any plans to return to fight again, though he did suggest on an Instagram post he might make himself available for 3 or 4-round exhibitions if the price was right. Already, some people in Australia are talking about offering him $1 million to fight an exhibition against a rugby star or two. 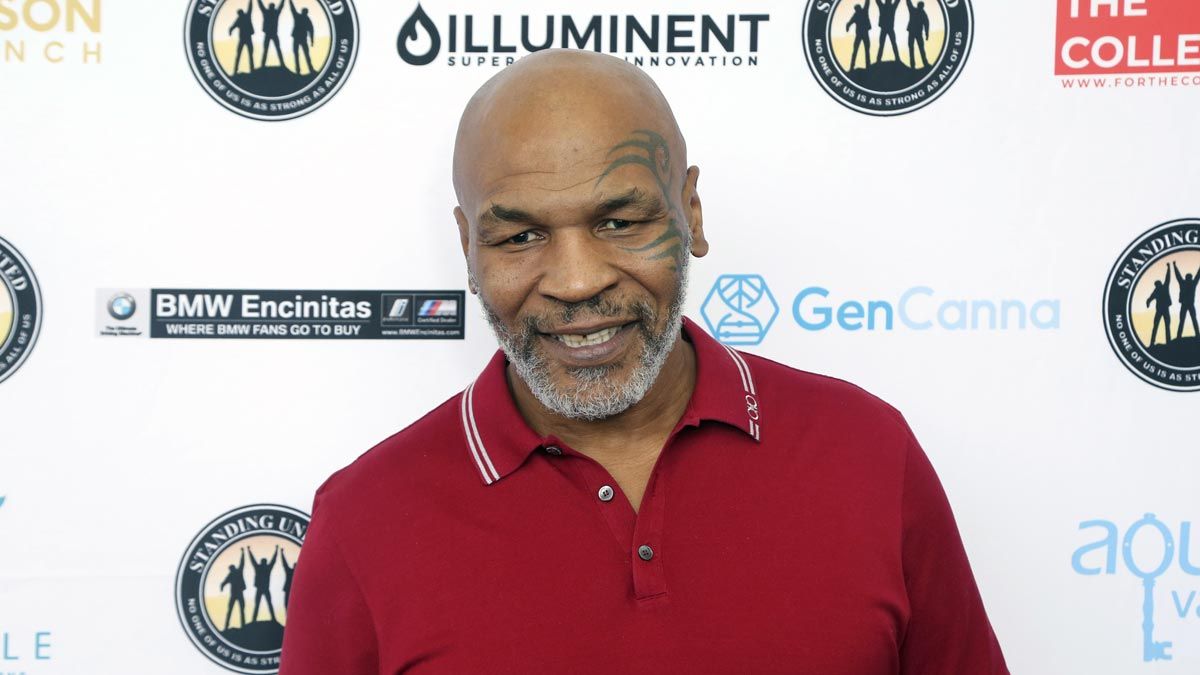 If the internet is any guide, there's certainly interest. Tyson's video showing him hitting mitts in a gym not only generated more than 9 million views in just a few days but also some buzz about just what the aging former champion might have left.

And let's admit it. Tyson looks good, still explosive and still very powerful even at an age when his mailbox mostly consists of sign-up letters from AARP. In someone's fantasy — maybe his own — he looks good enough to take on another heavyweight in a real fight if someone was willing to offer him millions of dollars to do so.

"He hasn't hit mitts for almost 10 years. So I didn't expect to see what I saw," trainer Rafael Cordeiro told ESPN. "I saw a guy with the same speed, same power as guys 21, 22 years old."

It's a drill Tyson has always excelled at. When he was grooming Tyson as a teen, trainer Cus D'Amato had a number system for each punch Tyson threw and would call them out as an assistant held the mitts and Tyson dutifully threw a right hand or left hook.

I watched Tyson train for most of his big fights, and hitting mitts worn by a trainer was always a big part of his preparation. To be honest, he doesn't look much different doing it in the video at the age of 53 as he did as heavyweight champion at the age of 23.

The speed is still blazing, and the power still looks real.

When no one is hitting him back, that is.

Tyson posted the video with the hashtag #stillthebaddestmanontheplanet. His fans didn't take long to respond with predictions that Tyson could be the heavyweight champion once again.

That's nonsense, of course. Tyson couldn't beat a journeyman heavyweight at his age, much less the cream of a division that was just starting to hit its stride when the pandemic shut everything down.

And while people remember Tyson for his spectacular knockouts in his prime, remember that this is a man who gave up while sitting on his stool in his last fight 15 years ago.

But boxing will return. And Tyson remains intriguing, even to a new generation of fans who know him only through tales from their fathers or videos of him at his most vicious.

I've got as much insight into this as most. I was ringside when Tyson became the youngest heavyweight champion ever by knocking out Trevor Berbick in 1986, and I was there in 2005 in Washington, D.C., when he quit after six rounds against a journeyman who wouldn't have made it through the first round with him in his prime.

In between, I covered him as he threatened to eat Lennox Lewis' children, bit Holyfield's ear and led us all on a wild ride around the world the likes of which we will never see again.

So I feel qualified to say that any fantasies that he can legitimately fight again are just that.

I'm guessing Tyson is doing nothing more than fanning the flames of fame by teasing fans with his latest video. The fact is, he's done a remarkable job in finding a new path in life after boxing, with acting gigs, a one-man show, a podcast and now his Tyson Ranch cannabis business.

All publicity is good publicity when you're Mike Tyson, and he's getting plenty with a video dropped at a time the world is starved for sports of any kind.

The alternative is he's smoking so much weed he's beginning to believe he can be what he once was.

Or maybe it's just making him hungry.

Which would, of course, make a third fight with Holyfield seem a lot more appetizing than it really is.