NEW YORK -- Before he took off his oversized aviator glasses and stripped his sweat pants to reveal a pair of boxer shorts with a dizzying, mesmerizing color pattern, Jonas Sultan gave his opponent a mean glare.

And then he walked gently to the scales where the 29-year old from Zamboanga City tipped in at 117.6 pounds, well under the bantamweight limit.

"He is ready to rumble," an ecstatic MP Promotions president Sean Gibbons told me as the Tyson-like Filipino, built like a fire hydrant and nicknamed "One Punch," battles Carlos Caraballo in the co-feature of a Top Rank-ESPN card at the Hulu theater inside the Madison Square Garden tomorrow morning. 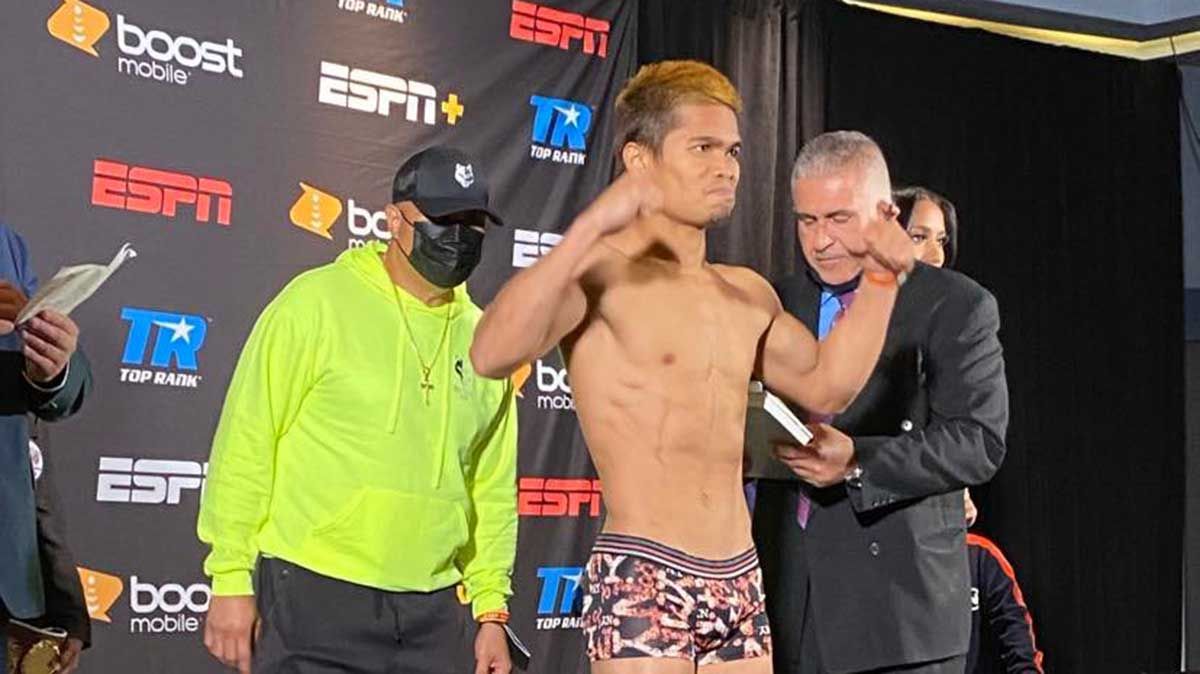 After the weigh-in, Sultan and his entourage made the trek back to the Stewart Hotel along 7th avenue, a short walk of about five minutes and 358 feet.

A feast highlighted by "bulalo," spaghetti and fruits awaited Sultan in his room and he was quick to wolf some of it down like a castaway.

With just hours left before he faces the undefeated Puerto Rican, who has knocked out all 14 of his opponents, top betting website Draft Kings has pegged Sultan as a steep plus 500 underdog, which means a $100 wager on him yields a $500 profit.

Sultan, 5-foot-4 and leaking with confidence is impervious to those numbers. He knows his fists and his way around the ring will have plenty to say about the outcome.

"He had an amazing camp. He worked hard, did his job and didn't cheat. That's all you can ask for a fighter and whatever happens in the ring, happens. But if Jonas can weather Carballo's early onslaught and grind the fight down the deep waters, Jonas has a great chance to win," Gibbons explained.

"Jonas is in the greatest shape of his life. We know it is going to be a tough fight but we have faith in Jonas' experience and his ability to make adjustments when he is atop the ring with a dangerous opponent. "

A win here in the Big Apple will open so many doors for Jonas, including a possible title shot at one of the belts in the talent-rich bantamweight class.

The Sultan-Carabllo brawl airs live on ESPN at 10 pm (easter standard time) here in the U.S. and 10 am tomorrow morning in the Philippines.

Words were said and dagger looks were pitched. So not surprisingly, a mini brawl tainted the official weigh-in a few hours ago when the camps of the main event fighters -- super lightweights Jose Cepeda and Jose Vargas --- got into it on the stage.

The ugly tug-of-war was a stark contrast to the lovely sight of the Top Rank round girls, who despite the cold weather outside, were so delightfully unredressed in their super tight pants and midriffs.

Meanwhile, I gurgled another liter of Bacardi Rum while camping inside my hotel room to write columns for SPIN.ph and churn out stories for two other websites that I have ties to.

Dinner this time was a $28 to-go box full of BBQ beef, chicken wings and fried rice that I fetched at what was advertised as "the world's largest buffet" somewhere on 33rd street.

After devouring my meal, I wandered off to 312 W 34th street hoping to catch the James Bond flick "No Time To Die" at the AMC Theaters but the movie's 2-hour 43-minute running time made me recoil and watch the NBA on ESPN instead.

Prayers up for Jonas and here's hoping that Sultan becomes king of New York.