LAS VEGAS — Manny Pacquiao's story is so remarkable that anyone familiar with it can't help but root that it doesn't come with a bad ending.

Fighting his way out of abject poverty in the Philippines was an accomplishment all by itself. Winning titles in eight different divisions and becoming a star pay-per-view attraction cemented his status as a boxing legend.

And don't forget about Pacquiao's second career as a politician. There's an outside chance he could end up as president of the Philippines if he plays his cards right.

The fact Pacquiao has options out of the ring might make it easier to retire following his decision loss to Yordenis Ugas. Hopefully he also has some of his millions left over to help him resist the urge to lace up the gloves again.

Yes, he could conceivably still fight, even at the age of 42. And, yes, people would probably still line up for tickets to watch.

But for all intents and purposes, it's over, something Pacquiao himself seemed to acknowledge, even if he wasn't quite ready to announce his retirement.

"Thank you to all of you," he said in a post-fight press conference that sounded a lot like the last one he will have. "Thank you boxing."

Boxing history, of course, is littered with fighters who couldn't quit on their own terms. Even Muhammad Ali wasn't immune, fighting in a cow pasture in Bermuda in a forgettable last fight and then having to fight Parkinson's the remainder of his life.

Here's hoping we've seen the last of Pacquiao in the ring. Not because it seems like boxing will have a big hole to fill with his departure, but because time has taken its toll on Pacquiao like it has for so many fighters before him.

Golfers can play long past their prime, as evidenced by Phil Mickelson's PGA Championship win at the age of 50. There's a football player Pacquiao's age in Florida who is coming off a Super Bowl win and showing no signs of wanting to hang up his cleats.

But you don't play boxing, where there's always a chance the next big punch may be the last.

No, Pacquiao didn't look horrible in the ring when he dropped a unanimous decision to Ugas. But he sure didn't look like a fighter who could beat Errol Spence Jr., a dominant welterweight who was scheduled to be his opponent before being diagnosed with a detached retina two weeks before the fight.

Pacquiao caught a break by escaping a possible beating. But even the unheralded Ugas was able to beat him going away — a clear sign that after 26 years fighting as a pro it's time to hang them up.

"I am a fighter inside and outside the ring and I have work to do now for my people," Pacquiao said. "In the future, you may not see Manny Pacquiao again in the ring but I am so happy [of] what I accomplished." 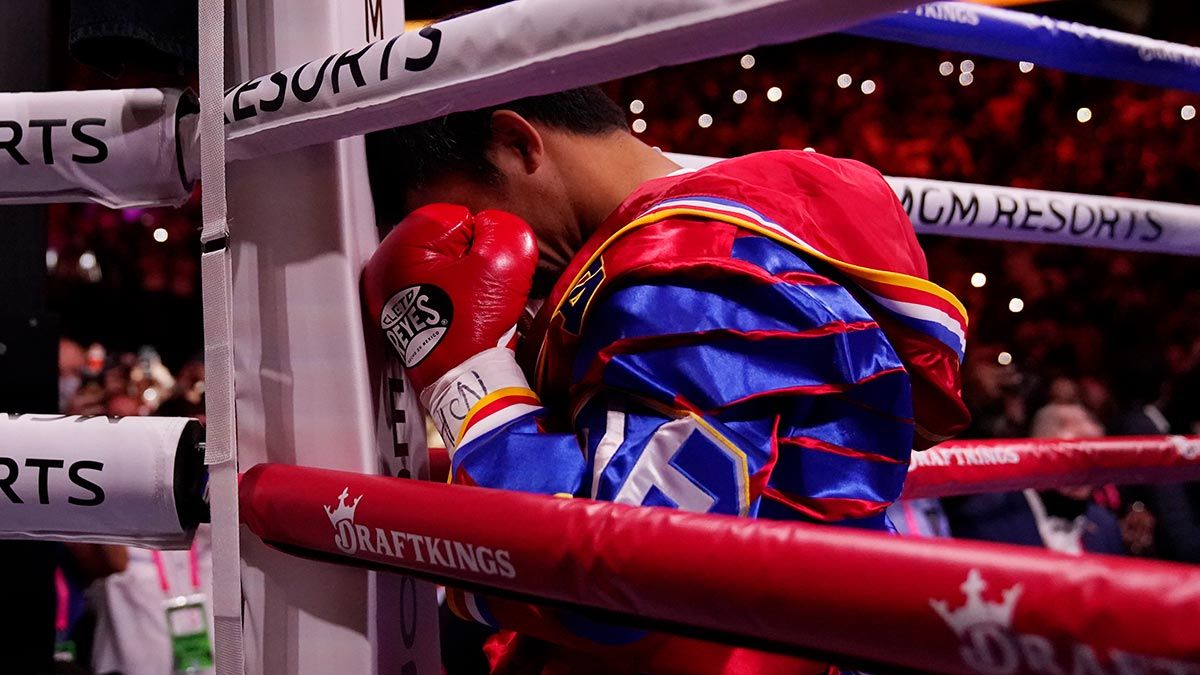 Those accomplishments are many, and they are well earned. Pacquiao fought the best, beat most of them, and — except for his surprisingly lackluster performance in his hugely hyped fight with Folyd Mayweather Jr.— delivered every time he stepped in the ring.

He's not only a Hall of Famer but an inspiration to fighters everywhere. Once a street urchin, he became one of the most celebrated and highly paid fighters ever — and did it by fighting anyone who was in his path.

His fights were national occasions in the Philippines, where life stopped for a few hours every time he went to battle. He would become famous in America, too, and spent long hours learning English so well that he could easily do interviews in his second language.

Now, there's nothing left to accomplish. No more belts, no more talk about a second fight with the retired Mayweather.

And certainly no fights at his age with the likes of Spence or Terence Crawford.

Luckily for Pacquiao, he's got other options.

Already a senator in the Philippines, he has teased the possibility of a presidential run next year. The polls so far don't favor him but Pacquiao has been competitive in any fight he's ever been in.

Boxing will miss him, even as other fighters take his place. He was always entertaining to watch, always faithful to his sport.

But in the end, the one battle Pacquiao was never going to win was with Father Time.