'Beast' yet to come for Jerwin Ancajas

PINCH your cheek and keep telling yourself this: "It's just his first fight in the United States."

Carrying the weight of his countrymen's huge expectations squarely on his shoulders, International Boxing Federation (IBF) junior bantamweight (115 lbs.) champion Jerwin 'Pretty Boy' Ancajas did not disappoint and turned in a workmanlike 10th-round stoppage of Mexican Israel Gonzalez before an impressed audience at the Bank of America Center, Corpus Christi, Texas. Ancajas scored three knockdowns and was way ahead in the scorecards when referee Rafael Ramos pulled the plug and waived the fight over.

It was Ancajas' first ring appearance in the United States and, truth be told, also the first fight where his countrymen religiously monitored the result on television. Ancajas has been a champion since 2016 and had made three successful defenses before the Gonzalez fight, but it was as if he was just getting introduced to local fight fans, too.

Ancajas was just a blimp on the local boxing radar until he started making some noise in July 2017, when he stopped lanky Japanese Teiru Kinoshita in seven rounds in the undercard of the Manny Pacquiao-Jeff Horn welterweight title match in Brisbane. Four months later, Ancajas travelled to Belfast and bamboozled unbeaten challenger Jamie Conlan in six rounds. A month later, Top Rank Promotions inked Ancajas to a six-fight deal that kicked off with the Gonzalez fight.

Ancajas' association with Top Rank, the promotional giant that made Pacquiao a mega star, started earning him plenty of media ink from the local and international fight media. By the time of the Gonzalez fight, the hype had escalated to the extent that Ancajas was being trumpeted by some local scribes as the 'new Pacquiao' of Philippine boxing.

It would have been easy for Ancajas to be swayed by the comparisons with Pacquiao, but he chose to stick to his own approach in handling Gonzalez. Ancajas scored a knockdown early in the first round with a huge left hook, but instead of going gung-ho on offense in Pacquiaonesque fashion, Ancajas exhibited patience.

Gonzalez tried to initiate a slugfest in the middle rounds, but Ancajas' stiff right jab repeatedly frustrated the Mexican. Ancajas' jab is not just textbook, it's "encyclopedic" and was in full display in the Gonzalez fight.

Two words that do not really jive best describe Ancajas' style: methodical and exciting. Ancajas worked on Gonzalez like a termite; he first weakened the foundation then released the wrecking ball in the 10th when the challenger had been reduced to a condemned building. The end result was a victory exclusively penned by Ancajas. 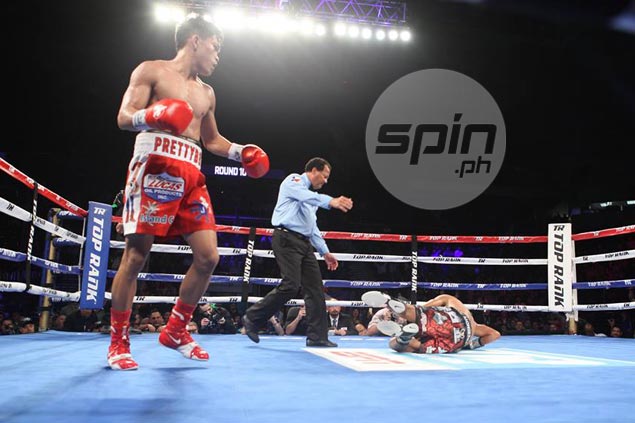 Ancajas' improved his record to 29 wins, 1 loss, 1 draw with 20 knockouts. He has not lost since 2012, when he dropped a majority decision to countryman Mark Anthony Geraldo. Counting the win over Gonzalez, Ancajas has won his last 16 fights, 15 within the distance.

The win over Gonzalez made for a successful coming out party in the US, but Ancajas knows his journey to stardom has just begun. He is the first to pinch his cheek, so to speak, and acknowledge that there's still a lot of work to be done. The important thing is that Ancajas did not buckle from the enormous pre-fight pressure and delivered.

The best is yet to come from 'Pretty Boy.' And the beast, too.