Ancajas retained his International Boxing Federation (IBF) super-flyweight crown as he proved too quick and too experienced for Jonas Sultan in the historic 12-round fight at the Save Mart Center here.

Two of the judges scored it identically at 119-109, while the other had it at 117-111, all for Ancajas, after the first-ever fight between two Filipino fighters with a world title at stake since 1925.

Other than its historic relevance, there was nothing really great about the fight.

Although sluggish for most of the bout, the 26-year-old Ancajas relied on his quickness and timely jabs to keep Sultan from getting into any form or rhythm.

Except for a big right he landed in the third round and two powerful lefts in the ninth, the challenger never stood a chance against the crafty champion, who made the fifth successful defense of his 115-pound belt.

If there was any consolation for Sultan, he ended the fight up on his feet and avoided becoming the latest knockout victim of Ancajas.

The champion from Panabo City, Davao del Norte said he didn’t hold his punches against Sultan. More than anything else, patience was the key. 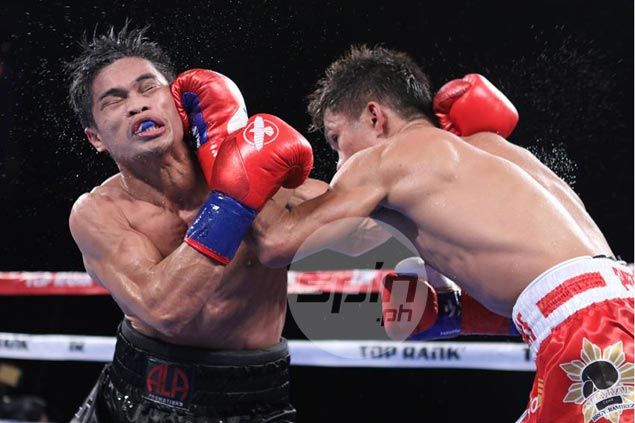 He did just that, engaging Sultan in several heavy exchanges in the last two rounds that served as the defining moment of the bout.

“Doon namin binuhos sa 11th round para convincing yung panalo niya, siya na yung papasok, tsaka tumapon ng maraming suntok,” said Jimenez in the post-fight interview inside the champion’s dressing room.
Ancajas had Sultan on the verge of going down when he made the last-ditch assault against the challenger. But the 26-year-old Sultan stood his ground and survived the onslaught.

The native of Tampilisan, Zamboanga del Norte fell to a 14-4 record with 9 KOs in his first attempt at a world championship.