Although both men are among the prime movers of bowling in the Philippines and for a time their careers followed the same trajectory, the contrast of their current stations was an interesting sidenote to the day's activities.

In his trademark red, white and blue shirt, 57-year-old Paeng Nepomuceno, probably the best bowler in history, was competing in the center lane in a qualifier for the national finals to pick the Philippine representative in the next bowling World Cup. The past and the present rolled into one sinewy, focused strike machine.

Christian Jan Suarez, on the other hand, was wearing a dark blue polo shirt with the SM logo on the left chest. After last seeing action in the bowling circuit eight years ago, he hopes to revive his sport’s popularity and restore the Philippines as powerhouse in the sport after being put in charge of the SM Bowling Center as division manager.

Only 35, CJ is the past who is hoping to help pave the way for the future delivering his smiling presentation to the press.

Suarez is the last Filipino to reign as world bowling champion when he won the World Cup in Tegucigalpa, Honduras in 2003. For his feat, the rising star was named Athlete of the Year by the Philippine Sportswriters Association.

After representing the country in the 2006 Qatar Asian Games, Suarez was among the members of the national team who left out of frustration, partly due to politics in sports.

“Marami po ang nangyari during that time - there was too much politics, issues with the coaching staff, the government and the Philippine Sports Commission,” he said.

The former world champion afterwards embarked on a career with Fitness First where he worked for the next seven years, the last five in India where he helped expand the international brand.

The University of Asia and the Pacific alumnus returned to the country five months ago and has been with the Sy-owned corporation in the last four where he signed on as the main architect for a hoped for resurgence of the company’s bowling arm which CJ said he hopes to transform into the “Starbucks of Bowling” in the Philippines.

“Buti na lang there came an opportunity to join SM and give something back to the sport. For me this is one of the dreams that are coming true already and a reality. This is a perfect opportunity for me to give back,” he told the press at the flagship SM Bowling center in the brand-spanking new facility at the Megafashion Hall in Mandaluyong City. 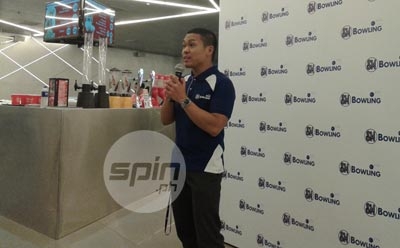 All about customer experience

Banking on his experience in his years with Fitness First, Suarez will bank on innovation to bring bowling closer to the public, particularly the youth.

In the next two months, all eight SM bowling centers around the country will see significant transformation.

Parts of the upgrade will include cutting edge technology such as the Bowler Entertainment System X (BES X), which heightens customer experience to enjoy the game by combining the essentials of bowling and the most advanced offering of this new entertainment system to the market. One feature permits patrons to chat with other bowlers while playing, and post their final game scores on their own Facebook walls.

Also in store is an updated scoring system, a first in SM Bowling Center, which gives the customers an option to personalize their digital score board with their own photos - an innovation targeting today’s youth because it allows them to learn bowling and at the same time document their experience in social media.

Another starting point is the launch of the SM Bowling Academy which Suarez said is helping his team “understand what could make teenagers to take up the sport."

“Before, there was no continuity in programs since these were only limited during the summer season. We are going to create a program that is spread throughout the year. There will be different programs for the youth and adults,” he said of their future plans.

One of these is the US Bowling Congress-accredited “SM Learn to Bowl Program,” where Nepomuceno will help train the coaches of the SM bowling centers.

It starts with the campuses

Another ambitious plan is for SM to tie up with educational institutions and inter-school competitions.

“We will go to schools and ask if they could include bowling as part of their physical education curriculum, incorporate the sport in varsity programs that could possibly turn into a venue in the UAAP and the NCAA,” Suarez said.

After finishing their modernization of facilities, SM is ready to line up inter-school competitions.

“As of now we’re preparing a lineup of tournaments and conducting a review of the rules to make them simple with support from the Philippine Bowling Congress.”

Another tournament in the works is the SM Cup. According to Suarez, SM will soon be holding nationwide tournaments this November, culminating in a December tourney at the Mall of Asia.

“My dream is to bring back the popularity of bowling like we had before. To be honest, I miss the times when we had tournaments that were very well attended. We had youth programs and kid programs. We’re trying to understand how we can bring back that popularity,” he said.

While the invited media took part in a mini tournament, Suarez, who said he only bowls leisurely while he focuses on his job at SM, occupied a separate lane where he displayed the form that made him, at one point, the best bowler in the world.

Asked if he misses competing, Suarez smiled and said, “Yes, I miss competing. Iba po yung high, the adrenaline and the high when you win a medal.”

“By doing these programs, hopefully we could tap talents that SM Bowling Center can then develop and send to international tournaments,” he added.

So while Paeng Nepomuceno, possibly the G.O.A.T. of bowling (greatest of all time), continued to play for the country in one lane, several lanes away was CJ Suarez, who is paving the way for the future.