BIEN Lozada, a 68-year old retiree recovering from a mild stroke, defied doctor’s orders to give his wife a fitting birthday gift in winning the P1 million grand prize of the 3rd SM Bowling Millionaires Cup Finals on Wednesday at the SM Megamall in Mandaluyong City.

The Open Masters Division was a battle of sexagenarians as top qualifier Lozada emerged victorious in his two matches against 66-year old Letty Pineda. The first game was close, 209-207, before Lozada found his second wind in the next match to pull away with a decisive 237-195 win.

The third time’s the charm for the retired Asian Development Bank employee who was recently released from the hospital after suffering a mild stroke.

“Ayaw akong payagan ng mga doktor na maglaro eh kasi umiikot ang paningin ko,” said Lozada, who believed his feat was a sign of divine intervention since felt well during the three-day run up to the national finals, the culmination of a seven-month long campaign.

Lozada had been playing in the tournament since April and had a deep personal drive for pushing through despite the risk on his health.

However, Lozada said he has nothing specific yet in mind with what he wants for a birthday present since they did not expect to win, especially considering the field that they faced. SM Bowling head CJ Suarez said 250 bowlers took part in this year’s edition. A total of P6 million pesos in total cash prizes were awarded to the winners and runner-ups.

Lozada’s wife was also in attendance to give her full support in the two-lane bowling alley set up at the SM Mega Fashion Hall, giving him the much-needed motivation as well as offering some adjustments he needed to make on his game.

Prior to the Open finals, Lozada also qualified in the Classifieds finals where he won P350,000 in a second place finish against rising star Neil Patrick Nuquis. He made sure he would win in the next match. 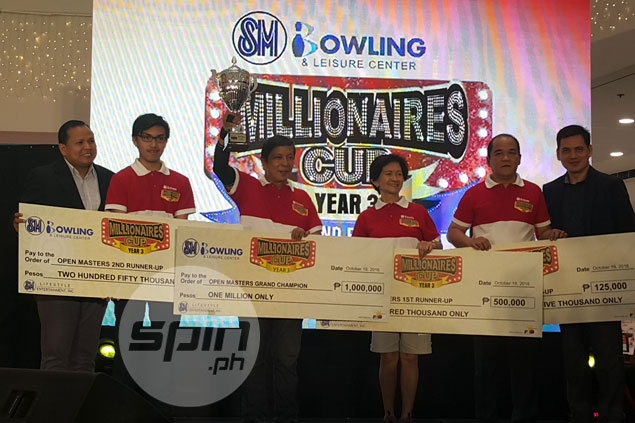