WHILE his La Salle Greenhills High School classmates were taking their exams, Patrick Neil Nuquis was engaged in a different test on Wednesday at the 3rd SM Bowling Millionaires Cup in SM Megamall.

In a battle of youth against experience, the Grade 10 student displayed form and focus beyond his age when he bested 68-year old Bien Lozada to bag the P600,000 top prize in the grand finals of the tournament’s Classifieds Division at the SM Fashion Hall.

The top qualifier for the Classifieds, Nuquis won the first match, 202-199, before filling the frames seven strikes and spares in the second game for a decisive 248-215 victory against Lozada, who would later win the Open Division.

The young bowler admitted he only expected to reach the Top 8 in his first campaign in the Millionaires Cup and was surprised when he reached the Finals of the 7-month long bowling tournament, which is the richest in the country.

“Yes because it’s my first time (competing in a tournament like this). For me, I’m 15 years old and the competitors are all older than me. I didn’t mind their scores, I just minded my game,” said Nuquis.

“I just focused on my game, executed my shot perfectly so I can get more strikes,” he added on his strategy in the final round. “I guess I just blocked everything, the people. It was just me and the lane.”

A fan of bowling great Paeng Nepomuceno, the soft-spoken Nuquis said his dad and sister influenced him to take up bowling, which is his only interest and hobby outside of school. But while he hopes to join the national team someday, his studies remains as his top priority.

Asked what he would do with his prize, Nuquis said he will save his winnings in the bank and use a portion to enter other tournaments.

“I was just very happy. I felt just happy that I won,” said bowling’s rising star. 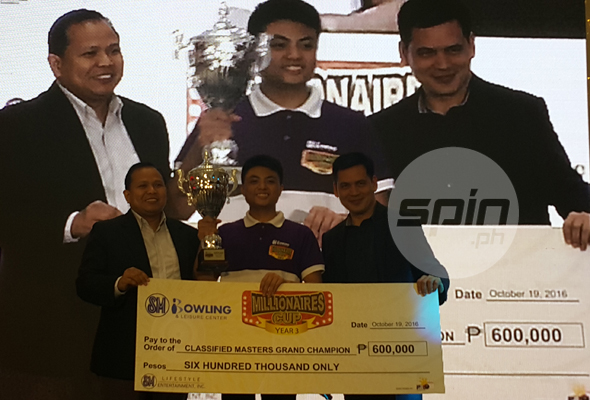