[Editors' note: With this piece, SPIN.ph bares the fourth member of our Top 10 Sports Heroes of 2017 leading up to the announcement of our 2017 Sportsman of the Year]

CARLO Biado has been winning billiards tournaments all over the world for quite a while now, but he will never mention himself in the same breath as Django Bustamante, Dennis Orcollo, Alex Pagulayan, and his childhood idol Efren 'Bata' Reyes.

The new flagbearer of Philippine billiards?

That's furthest from his mind.

Still, it's not difficult to bestow Biado of such honor after a dream year that saw him win three major tournaments around the world highlighted by his victory in the 2017 World 9-Ball Championship in Doha, Qatar.

Those three victories stood as validation for all the hardwork and perseverance of a young man who picked up the sport after watching his father play pool the old-fashioned way - remember those plastic chips serving as balls?

But like most pool artists of his generation, he was inspired to reach for his dreams by the great 'Bata.' 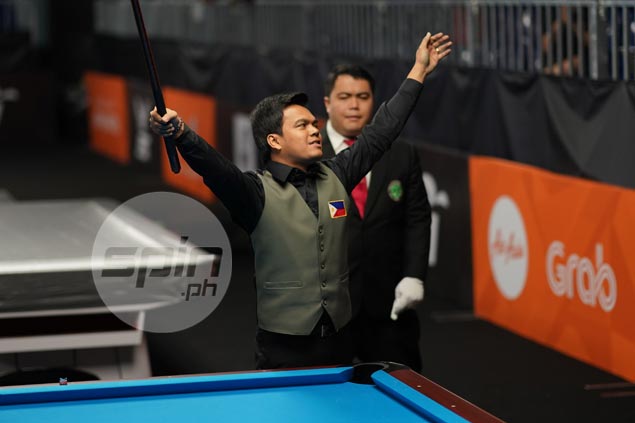 He finally came face to face with Reyes in the green felt table in 2003 and, after several years of trying, finally beat the billiards legend in 2010.

But his rise was by no means easy. Biado kept falling short in major tournaments including the World 9-Ball and 10-Ball Championship, tumbling in the final hurdles.

The dusky pool artist felt he finally turned the corner in 2015, when he lost in the finals of the Manny Pacquiao 10-Ball invitational in General Santos City to Ko Pin Yi of Chinese Taipei.

True enough, he rode a wave of good form in a dazzling stretch that saw him win gold in the World Games in Poland, a multisports event mostly for sports that are not included in the Olympic program, where he beat Scotland’s Jayson Shaw, 11-7, in the final in July.

Just a month after, Biado returned to the Southeast Asian Games in Kuala Lumpur where he was a gold medal winner in the 9-ball doubles two years ago in Singapore. Competing in the singles this time around, Biado beat three foes before edging Duong Quoc Hoang of Vietnam, 9-5, in the gold medal match.

Before 2017 could end, Biado reached the pinnacle of his sport when he beat Roland Garcia in the all-Filipino championship match, 13-5, to join his idol Reyes in the elite list of World 9-Ball champions - the first Filipino since Bustamante in 2010 to win the title.

In his greatest moment, Biado paid tribute to Reyes and the other pool greats who paved the way.