JEMAL Vizcarra is on a renaissance of sorts as one of the key players of the Paranaque Patriots-Gamboa Sports in the Maharlika Pilipinas Basketball League (MPBL) under his college coach Aric Del Rosario.

Vizcarra was one of the standouts of the Growling Tigers during the twilight of Del Rosario's long coaching career at UST. He was actually part of the last UST team to win the UAAP championship in 2006 under Pido Jarencio, but played just one game as he suffered an ACL injury.

At 35, Vizcarra said he is glad to reunite with Del Rosario, who he considers as his second father.

This was not the first time Del Rosario called to recruit Vizcarra after college. After he got injured in 2006, Del Rosario signed Vizcarra to play for the Pampanga Buddies in the defunct Liga Pilipinas, a league where he played until 2013.

Vizcarra said no one believed in him during those trying times except Del Rosario.

Five years after his last competitive game, Vizcarra again got a call from Coach Aric, this time on behalf of the Paranaque team. 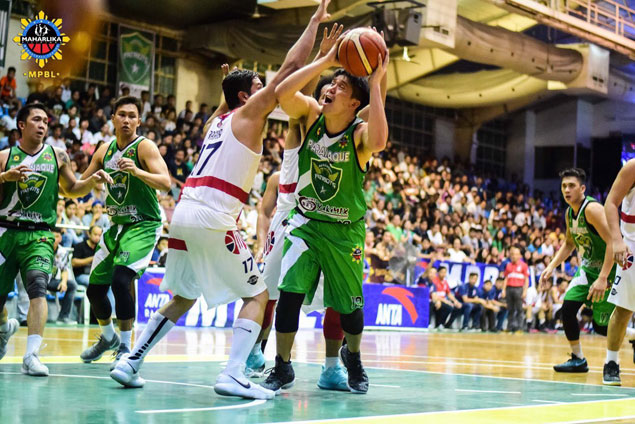 By this time, competitive basketball was the last thing in Vizcarra’s mind as he was already tending to his business. Basketball to him was no more than a leisurely pick-up game.

But he can't say no to his Tatay Aric.

After accepting the offer, Vizcarra, who incidentally is a Paranaque resident, regained his passion for the game.

He found out just how difficult it was to get back in competitive shape after such a long layoff, but Vizcarra persevered keeping up with younger teammates in training.

Now, Vizcarra has become Paranaque's most important player. On Saturday, he put on a show before Paranaque's home fans at the Olivarez College Gym as he finished with 16 points, five rebounds, and four assists in a 79-77 win over Imus.

In eight games, Vizcarra become the team’s leading scorer in the MPBL Anta-Rajah Cup with an average of 14.13 points per game including a conference-high 21 points against Bataan. He scored in single digits just once and is also posting averages of 5.13 rebounds and 2.38 assists.

Not bad for someone his age, right?