Abueva a 'beast' for SSC Stags in more ways than one

FIRST he damaged one of the rims of The Arena in San Juan with one of his thundering dunks in pre-game warm-ups, delaying the start of the game for more than an hour.

Then 'The Beast' Calvin Abueva presided over the destruction of Emilio Aguinaldo College.

With starting big man Ian Sangalang sidelined by a knee injury, Abueva took matters into his own hands as he flirted with another triple-double in San Sebastian's 94-93 victory over the Generals in the NCAA men's basketball tournament.

The league’s reigning MVP was an unstoppable force for the Stags, recording 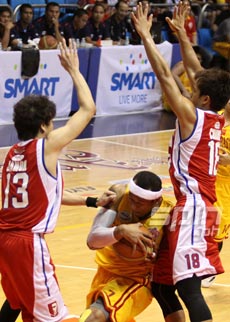 to the delight of his second-year mentor.

“This is not his league anymore,” Stags coach Topex Robinson said of his prized ward.

The Stags, who had won their past five games by an average of 17 points, endured anxious moments before securing their sixth straight win as they squandered a 17-point third-quarter lead.

However, Abueva’s two charities quelled the Generals’ late run and made it 93-88 for the Stags with 14.8 seconds remaining.

Ronald Pascual shone as well in Sangalang's absence with 21 points, including five triples, on top of seven boards and four assists.

Despite their solid performances, Robinson still underscored the importance of Sangalang, who’s doubtful for the Stags’ last two games of the first round.

“Sangalang is really a big factor for us. I can do away with Calvin and Ronald, but not Ian,” said Robinson, whose wards led 76-59 before the Generals made a comeback.

Cedric Happi Noube, who made an inconsequential triple as time expired, registered 26 points, 14 boards and three blocks to lead the Generals, who suffered their seventh straight loss after winning their first game of the season.