IF you’re a coach and you’re in the habit of doing that slit-throat gesture whenever you feel like your team is getting the raw end of the calls, here’s an advice.

Don’t you dare try it in the PBA.

“It’s an attack on the credibility and integrity of the league and it disrespects not just the officiating but the league as a whole. It has no place in any tournament, be in in the barangay level, in the college or amateur ranks or in the pro ranks.” 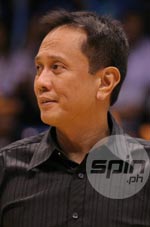 Apparently, the people running the show in the country’s top college leagues do not feel as strongly about the issue. Jarencio got away with a warning when he did the gesture during Game One of the last UAAP Finals against the Ateneo Blue Eagles.

Alas, on the other hand, copped heat after he made a similar gesture during Game Two of the NCAA Finals against San Beda, with the league’s management committee – acting on the recommendation of Commissioner Joe Lipa – threatening to slap him with a suspension if the Letran coach doesn’t issue a public apology.

But with Alas already issuing an apology through the media, the Letran coach, like Jarencio before him, will most likely come out of the incident unpunished – which former Philippine Basketball League commissioner Chino Trinidad finds quite odd.

“Granting na hindi sila sinuspinde dahil finals na, pero at the very least dapat meron pa ring punishment,” said the popular broadcaster. “If you know you’d risk being suspended if you do something and still went on and did it, then you’re looking for trouble.”

What Trinidad finds more troubling, however, were the actions of NCAA referees supervisor Romy Guevarra, who, angered by the Letran coach’s slit-throat gesture, was seen on replays flashing a dirty finger at Alas late in the game.

“When you took on that responsibility as a games official, no amount of provocation should make you react and show any emotion,” said Trinidad. All the complaints from coaches and the jeers from the fans “come with the territory,” he added.

Salud, Trinidad, and another former PBL commissioner, Yeng Guiao, were in agreement that the twin controversies could have been handled better had there been a defined structure in the two leagues that could properly address acts that are deemed detrimental to the leagues. 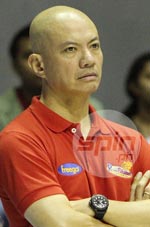 Guiao said the problem goes even deeper, citing the lack of a permanently tenured commissioner from both leagues as the “root cause of the problem.”

“Dapat the board or the management committee of these leagues should just be setting policies and guidelines,” said the Rain or Shine coach. “After that, it is the commissioner who should run the show.”

Under the present set-up of the two leagues, where all decisions of the Office of the Commissioner are subject to appeal before the board, Trinidad said the commissioners are no more than “caretakers” or “tournament directors” and his office no more than a "recommendatory body."

Salud said putting the final decisions on purely basketball matters in the hands of the board in the case of the UAAP and the management committee in the NCAA is a recipe for disaster. “When you give the final say to a conflicted group of people, you’re asking for trouble,” he said.

Appointing a permanently tenured commissioner for both leagues is “a big step in the right direction. Half the problem will be solved right there,” Salud said.

Asked what awaits Jarencio and Alas - incidentally, both are assistant coaches in the pro league - or any coach for that matter if they do a similar gesture during a PBA game, Salud said: "At the least, a hefty fine. Depende sa circumstances, but most likely a suspension as well."