JRU star Mabulac vows to get better, but urges teammates to push harder

WHILE admitting that he has so far been a pale shadow of his true self this season, Jose Rizal University power forward Michael Mabulac hopes his teammates would also step up for the Heavy Bombers to finally barge into the win column of the NCAA men’s basketball tournament.

Coming off a breakout year where he averaged 11.8 points, 9.7 rebounds, and one assist in 31.2 minutes to be adjudged as the league’s Most Improved Player, Mabulac is norming just six points on 23.1-percent shooting, six boards, and 1.5 assists in 22 minutes in the Bombers’ first two games — both losses.

One factor that could explain Mabulac’s limited production is the entry of Ghanaian slotman Razak Abdul Wahab, who is nearly averaging a double-double in his first two games.

The Bombers are targeting a return to the Final Four this year as the league’s hosts, but their performance as a whole has so far left much to be desired. 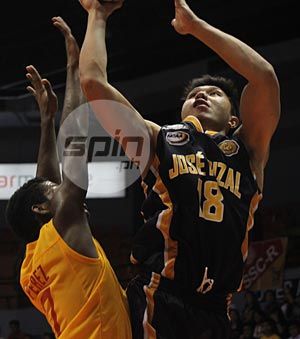 Mabulac also revealed an ankle injury, sustained the day before the Stags’ game, has slowed him down.

The Bombers held a long meeting, led by assistant coach Cholo Villanueva, in their dugout after the loss against the Stags.

Villanueva, according to Mabulac, asked his players, one by one, what their problems have been. And Mabulac recalled one from his teammate that summed up their season so far.