Blazers win, but too bad fans are not there to witness it

COLLEGE of St. Benilde coach Richard del Rosario's plea for support from the green-and-white faithful may have fallen on deaf ears, but at least he led the Blazers to a long-sought victory on Monday night.

Two days after inviting La Salle fans disappointed by the UAAP loss to Ateneo to watch their NCAA game against Arellano, del Rosario again took to the microblogging site to show the actual number of Benilde fans in attendance at the Arena in San Juan, which suffice to say was not a lot. 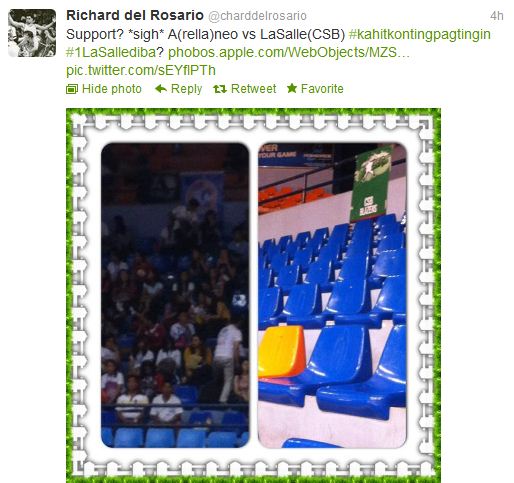 Too bad, they didn’t see how the Blazers defeated the Chiefs, 74-69, in a win that soothed their wounded pride after another season of missing the Final Four in the NCAA.

Finally showing the aggressiveness that was missing in their previous games, the Blazers led for the most part en route to only their fifth win in 17 games.

Mark Romero stepped up in the absence of the Blazers’ top two scorers in Carlo Lastimosa and Joel Tolentino as the versatile forward registered 17 points, four boards, and two assists.

Four more players scored in double digits for the Blazers, who dealt the Chiefs their 11th loss in 17 games.