AMID lingering questions on the eligibility of Davon Potts to play in the NCAA basketball tournament, the NBA and San Beda have issued statements denying claims that the Red Lions rookie declared for the NBA Rookie Draft.

Potts' name and photo have appeared in a number of US sports websites (like the one shown above) saying the 23-year-old guard out of Cal State Los Angeles has applied for the 2015 NBA draft where he went undrafted.

Those entries have sparked claims that Potts has already turned pro and is therefore ineligible to play in the NCAA.

However, NBA officials have issued denials even before the issue could get out of hand, with no less than NBA Philippines head Carlo Singson clarifying that Potts was never part of the 2015 draft pool.

“I can confirm that Potts was not an early entry applicant for the 2015 NBA Draft (he neither applied nor applied then withdrew from the draft),” said Singson.

Singson's claim was also backed by NBA salary cap specialist Erika Ruiz in an email to San Beda team manager Jude Roque - a copy of which was obtained by SPIN.ph.

"I have no record of anyone by the name of Davon Potts declaring for the 2015 NBA draft,” wrote Ruiz in the email.

In a separate interview, Roque told SPIN.PH that San Beda officials that supporting papers of all players, not just Potts, are meticulously validated before they are included in the lineup.

The 6-2 Potts has attracted a lot of attention in his San Beda debut with big games that have helped the NCAA powerhouse win its first seven games of the season.

“Sa ngayon kasi understandable yan, kasi maganda nilalaro ni Davon. Pero we didn’t encounter these issues during the pre-season eligibility meetings,” he said. “(Our players) all passed the eligibility process before the tournament.”

The San Beda official now hopes the Potts issue can finally be put to rest.

“I hope matapos na yan. Like we said, legit ang mga papers na hawak namin (for all of our players). Let’s just focus on enjoying the games of the NCAA,” said Roque. 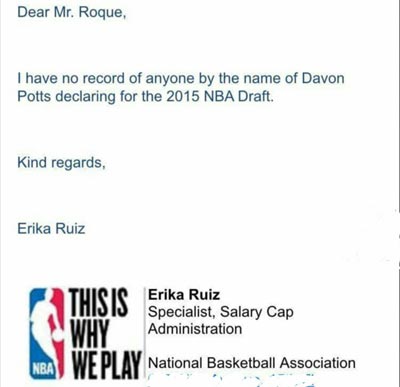