ATENEO coach Norman Black was correct. The Blue Eagles, however, either didn't listen or didn't take the warning seriously enough.

Black had pinpointed Aljon Mariano as the dangerman among the University of Santo Tomas players and his words proved prophetic as the forward led the Tigers to a 71-70 victory over the Eagles on Thursday in the UAAP men’s basketball tournament at the Smart Araneta Coliseum.

Karim Abdul completed UST’s victory with a driving lay-up over the foul-troubled Greg Slaughter with 10.3 seconds left for a 71-67 lead. 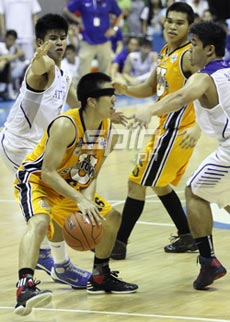 The win ended the Tigers' 12-game losing streak to Ateneo that dates back to 2007. It also ensured that there would be no perfect start for the fivepeat-seeking Eagles who won their first 13 games last season.

The Eagles led 39-20 in the second quarter and took a 15-point lead at halftime.

But Mariano took over for UST at the resumption, hitting crucial jumpers and scoring on a short stab to give UST a 56-54 lead they never relinquished. Frank Golla’s buzzer-beating tip-in of his own basket that was wrongly credited to Jeric Teng made it a 58-54 advantage entering the fourth.

UST’s biggest margin was eight points on a Mariano fadeaway early in the fourth. The closest Ateneo got was one-point when Juami Tiongson hit a triple with 4.3 seconds left. The clock still read 1.8 seconds when Teng missed two free throws but there wasn't enough time for Ateneo to heave a miracle shot.

Meanwhile, swingman Ralph Atangan scored 25 points as defending champion National University subdued the La Salle-Zobel Junior Archers, 80-74, at the start of the junior’s basketball tournament on Wednesday at The Arena in San Juan.

Far Eastern University used a big third quarter attack to fashion out a 69-58 victory over the Ateneo Blue Eaglets.

Hubert Cani, a national youth mainstay, chipped in 15 points while Reggienal Morido had a double-double with 14 points and 10 boards for the Jeff Napa-mentored Bullpups.

A 20-8 run powered the Baby Tamaraws to a 54-32 lead entering the payoff period.

Antonio Asistio was the lone Blue Eaglet in double digits with 14 markers.