THE schedule messed up their routine, an unusually early game contributing to a sluggish start.

But the gritty University of Santo Tomas Tigers got their game going just in time to nip the “home team” National University Bulldogs, 77-71, on Saturday in the UAAP men’s basketball tournament at the Mall of Asia Arena.

It was another come-from-behind victory for the Tigers, who were forced to an early start as the league wanted more time to prepare for the Ateneo-La Salle duel later in the day. 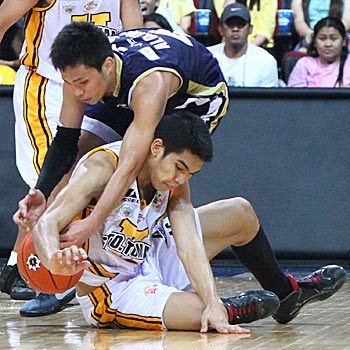 The Tigers fell behind by as many as 14 points in the second quarter and trailed by 10 early in the fourth but turned things around late to capture their second win in three outings.

It was the second-consecutive win for the Tigers, who overcame a 19-point deficit against Ateneo nine days ago.

The Tigers trailed, 53-63, early in the fourth quarter but scored 13 fastbreak points and limited the Bulldogs to only 11 points to gain the victory.

The Bulldogs had a 66-59 lead halfway through the fourth period but Teng finished a 9-0 run with a three-pointer for the go-ahead basket. Bobby Ray Parks quickly answered with another trey but that was NU’s last field goal.

Mariano scooted to the basket for a fastbreak lay-up followed by a Bautista lay-up, both coming off turnovers. Fortuna was fouled on a reverse lay-up for a three-point play, 75-69, with one minute and five seconds in the game.