Manzo delivers as UP rallies past Adamson again to tighten grip on No. 2 spot

ANTIPOLO -- Deja vu it was once again for University of the Philippines as it stormed back from 12 points down in the fourth quarter to stun Adamson, 81-77, Sunday in the UAAP Season 82 men's basketball tournament at Ynares Center here.

This time, it was Jun Manzo who steered the ship for the Fighting Maroons, scoring 13 of his 17 points in the second half as he led their rally after being down, 72-60, with 7:10 remaining. 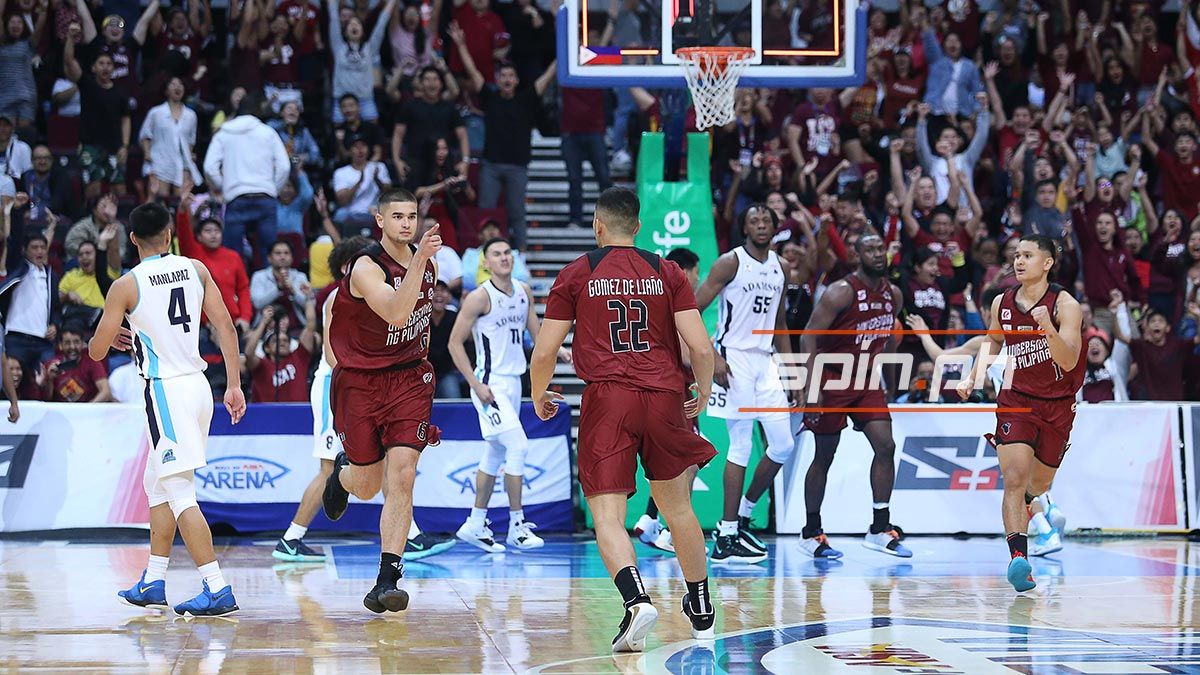 Jerom Lastimosa's three gave the lead back to Adamson, but Paras quickly took that back with a three of his own at the 1:25 mark to make it a 79-77 affair.

Pressure, however, was just too much for the Soaring Falcons at that point, with Valandre Chauca committing a costly turnover that led to Bright Akhuetie extending his side's lead to four with 1:08 remaining.

UP badly needed this win to stay at second spot at 7-4, while compounding Adamson's woes with this fourth defeat in five outings to send it down to a 4-7 card.

It was almost a repeat of their first round meeting, where the Fighting Maroons crawled their way back from 16 points down in the first half before pulling off the 83-82 overtime win last September 15.

Manzo also contributed seven rebounds and three assists, on top of his solid leadership on the court in UP's comeback late.

"When I saw Jun inside, I thought he was very tired. I was asking my coaches if he was tired because I would have subbed him out. But his face gave a look of a very stressful person who he badly wanted to win and we wanted to honor him with a very good game," said coach Bo Perasol of his team captain.

"Napakaganda ng pinakita niya, not just with his scoring but his leadership inside."

Adamson, meanwhile, now finds itself in danger of missing out the playoffs after this collosal meltdown.

Chauca found himself caged in the second half, being limited to just two points in the last two cantos and ended the game with 19 points, five assists, and two rebounds.

Jerrick Ahanmisi had 13 points and six boards, as Simon Camacho had 11 points, seven rebounds, and two assists in the loss.