GOLDWIN Monteverde is taking over the University of the Philippines' men's basketball program.

UP Chancellor Fidel Nemenzo made the announcement on Friday, naming the multi-titled high school mentor to the head-coaching position of the Maroons, succeeding Bo Perasol who resigned weeks ago.

Monteverde has long been touted as the frontrunner for the coaching vacancy, especially after top recruits Carl Tamayo, Gerry Abadiano, and Terrence Fortea moved from National University-Nazareth School to UP for college.

Before naming Monteverde, Nemenzo also interviewed several candidates, among them Gilas Pilipinas Women head coach Pat Aquino, who himself is an alumnus of UP.

"Despite the recent pandemic measures, we have continued with our consultations with the UP community, stakeholders, and supporters of the UP Men's Basketball Team. We also conducted interviews of the applicants as part of the vetting process for the selection of the UPMBT head coach," the statement read. 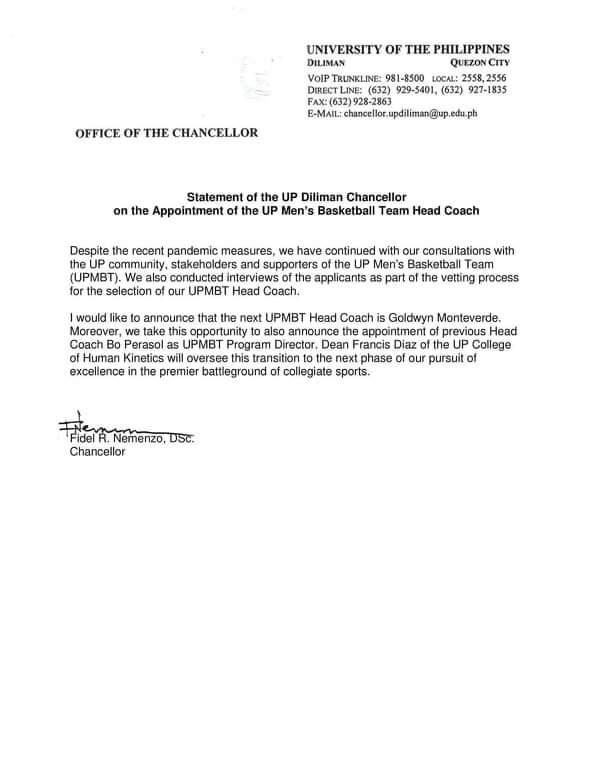 Aside from Monteverde's appointment, Nemenzo also named Perasol as the program director for the UP men's basketball team.

"The decision is a difficult one as UP has a very unique program in terms of management and community support," said Perasol, who oversaw the Maroons' return to prominence during his time in charge.

"Obviously, there are alumni supporters who have played a massive role in the resurgence of the program. It should be noted also that a UP head coach takes both coaching and management functions. All these factors have to be considered in addition to the coach's competence, experience, and disposition. Personally, it is the right decision under the present circumstance."

NowheretogobutUP Foundation founder Renen Dalisay said: "It's the start of a new era with the designation of the new head coach. But unlike before, the new head coach will be coming in with a solid organization and basketball program started during coach Bo's time."

UP has been in the Final Four for the past two seasons after being a perennial cellar-dweller for the better part of the last two decades since the Maroons last won a UAAP championship in 1986 with a team coached by Joe Lipa and led by Benjie Paras, Eric Altamirano and Ronnie Magsanoc.

The Fighting Maroons were runner-ups in UAAP Season 81 behind Paul Desiderio and that year's MVP Bright Akhuetie, and snared the second-seed in UAAP Season 82, only to fall to University of Santo Tomas in the stepladder semis.