UNIVERSITY OF THE PHILIPPINES

UNIVERSITY of the Philippines is looking forward to a better campaign in Season 78 of the UAAP after finishing dead-last a season ago. Again, the Maroons will have a new coaching staff that will try to regain the school’s old glory, and what better way to achieve it than on the same year the school plays host to the country’s premier collegiate league.

The Maroons enters the season with a new coaching staff, with Rensy Bajar designated as head coach and Joe Ward as one of his assistants. Joining them are UPIS head coach Allan Gregorio, former UP player Mo Gingerich, and Poch Juinio, the only holdover from last year’s coaching cast led by Rey Madrid.

For the first time in a long while, the Diliman-based school won’t have an alumnus for a head coach. Bajar played college ball for San Beda and suited up for nine seasons in the PBA, spending time with teams Shell and Alaska.

Bajar once coached the Diliman Preparatory School team, but this will be the first time he will be mentoring in the big league.

“Number one siyempre is the pressure, especially with what happened to UP for the past years. ‘Yun ‘yung nailalagay ko sa isip ko na how I should handle those situations,” said Bajar. 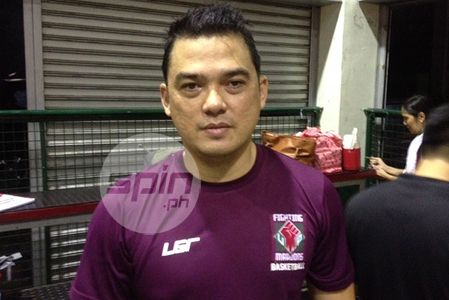 But he will have plenty of help from his deputies, especially with Ward also expected to have a hand in the team this season after calling the shots for the Fighting Maroons in the Filsports Basketball Association (FBA).

“We have different roles,” said Bajar.

The Maroons allowed more points than any other team in the league last year, giving up an average of 74.9 a game. UP also finished last in a few other defensive categories in Season 77, something the new coaching staff will try to change.

Bajar said his team is intent on turning the Maroons into a more defensive oriented squad.

“Right now, we are concentrating and refocusing on our defense. ‘Yun ‘yung battle cry namin for this year,” said Bajar, adding the coaching staff won’t hesitate sitting a player on the bench if he doesn’t play defense.

Desiderio, a recruit from Cebu, decided to skip all of last season to focus on his stint with Batang Gilas in the Fiba Under-17 World Championship. The Cebu native was impressive with the national youth team, and his return to State U could rejuvenate the Fighting Maroons' offense.

Same goes for Manuel, who returned for his final year after deciding to focus on his academics when he left the team after Season 76.

Bajar is confident the two guards can generate some offense for the team.

“Every time that we have an opportunity to run, kukunin namin ‘yung advantage na ‘yun,” said Bajar.

Dario has shown brilliance in limited playing time during his rookie year with the Maroons. But he finally blossomed into a potential take-charge guy during the offseason when he steered the Maroons to the FBA championship.

The UP coaching staff has taken notice, even hinting that Dario could be a game-changer for the Maroons this season.

5. Can the Maroons turn it around at last?

The Maroons winning the inaugural FBA tournament during the summer augurs well for a team that has gone through one forgettable season after another.

There is definitely an air of optimism surrounding the Maroons as exuded by their head coach, who said the Maroons won’t just win more than one game this season but are also capable of reaching the Final Four - something the school last experienced in 1997 behind a team bannered by the Paolo Mendoza and the late big man Bryan Gahol.

“Ako ang nagsabi ng Final Four,” said Bajar. “’Yun ang goal namin. We believe that we can attain it because sabi nga nila, dream big. We are dreaming on it.”

The players seemed to have embraced that.

“We have a system and we have a new coach,” said Dave Moralde, one of the veterans in the UP team. “Our goal is to make it to the Final Four.”