UNIVERSITY of the Philippines fans clad in maroon shirts filled almost half of the 8,000-capacity Filoil Flying V Center in San Juan on Sunday, an unusual sight in UAAP games especially at this time of the year.

The Maroons have been big disappointments in the league for decades. This time, they didn't disappoint, rewarding their enthusiastic fans with a 74-69 victory over University of Santo Tomas - their first over the Tigers in a 19-game stretch spanning 10 years.

By this time of the season in previous years, the Maroons are either cellar-dwellers or also-rans - no more than fodder for some other teams to either enhance their records or boost their Final Four hopes, and only their most loyal fans watching them from the fans.

But this season has been unlike most others. UP has won more games than even its most ardent fans expected it to and, more importantly, is still in the hunt for a Final Four place.

No wonder their fans are excited.

At 5-8 (win-loss), the Maroons are tied for fifth place with National University just 1 1/2 games behind Adamson in the battle for the final place in the semifinals.

The Maroons are on track to match their total of six wins in 2005 and are in with a chance to reach the Final Four for the first time since 1997, although that would entail a UP win over University of the East and defeats by Adamson in its last three games.

Still, being in contention alone this late in the season is reason enough to rekindle interest in the Maroons and raise the players' morale, Perasol said.

"More than anything else, we were able to generate excitement in the UP community," Perasol said. "Importante kasi that if you have a program like us, everybody has to feel that they belong in the program. 'Yun ang importanteng nakita ko." 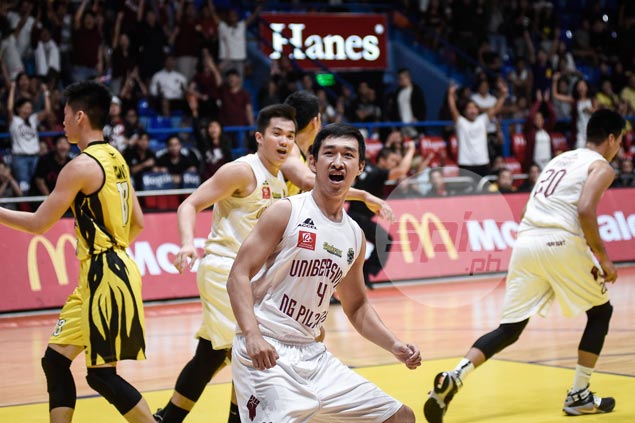 Perasol said the increase in attendance for UP games has definitely helped the Maroons sustain their form in a last-ditch push for a Final Four berth that has seen them win four of the six games in the second round.

UP veteran Kyles Lao has seen the dark days of the Maroons program, and has definitely noticed the difference.

Sophomore forward Noah Webb admitted he isn't used to the big crowd of supporters that it made him a little nervous.

"Medyo ninerbiyos ako sa una kasi ang daming tao. And the stadium isn't as big as Araneta or MOA," Webb said. "Thankfully, I was able to push it at the back of my head, focus, and play my game."

A semifinal appearance is still a longshot for the Maroons, but Perasol believes that regardless of what happens from hereon, seasons like this one can be a building block for a long-suffering team that hasn't won a championship since 1986.

"Hindi naman namin inaasam 'to nung una (Final Four). Iniisip lang namin how can we become better," he said. "I think we were able to achieve something that we can be proud of."