UP regent Farolan loses recommendation for reappointment after 'threat' post

THE University of the Philippines' Board of Regents withdrew its recommendation for the reappointment of Regent Frederick 'Spocky' Farolan following his controversial Facebook post that netizens felt threatened Ateneo players ahead of Game Two of the UAAP Season 81 Finals.

The Board of Regents made the announcement at the end of a meeting on Monday where Farolan was in attendance.

According to UP sources, the two-year term of Farolan ended last October.

A day after the UP Maroons lost Game One of the UAAP best-of-three finals, Farolan sparked a controversy when his post on Facebook hinted at three Ateneo players being injured for Game Two on Wednesday. 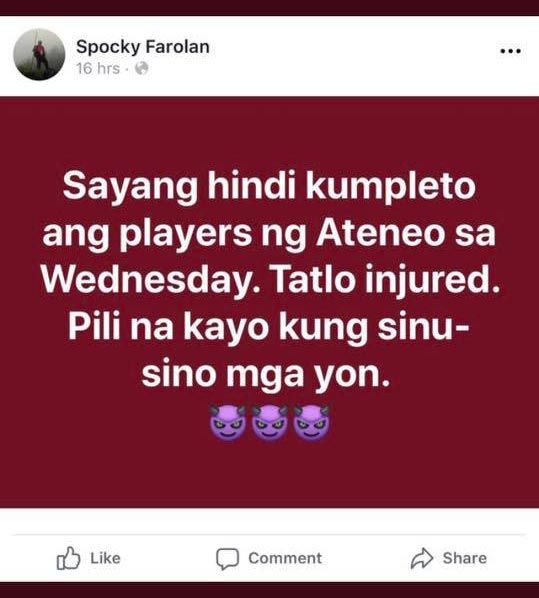 In succeeding comments on the thread, Farolan suggested a 'composite strike by all UP frats' as a 'sign of unity.' He added a rumble between UP and Ateneo frat members can serve as a side show at halftime.

Farolan later deleted the post saying "there was sarcasm in that comment which may not have been immediately and easily perceived by some."

Acting quickly, UP president Danilo Concepcion issued a statement on Sunday night disassociating the school from Farolan's post while the Board of Regents said sorry for the 'anxiety' the post has caused.

Here's the official statement of the UP Board of Regents in full:

The Board of Regents of the University of the Philippines takes note of the apology of Regent Frederick Mikhail I. Farolan during the Board of Regents meeting today regarding his post on social media that appeared to advocate the use of violence against members of the men’s basketball team of the Ateneo de Manila University.

We dissociate ourselves as a Board from Regent Farolan’s statements and actions. Whatever his motives may have been, there is no excuse for sowing fear and confusion, especially at a time when the University’s attention should have been focused on the rising successes of its athletic program. We view with extreme disapproval and strongly condemn violence in any form.

The Board continues to uphold the principles of civility and sportsmanship. All Regents, officials, and members of the UP community are expected to keep with the highest standards of decorum.

We apologize to the officials, staff, and athletes of the Ateneo de Manila University and to the UP community for any anxiety Regent Farolan’s statements may have caused. We also deeply regret the dampening of the euphoria of UP reaching the UAAP finals.

Committed to a higher standard of accountability for its members, the Board hereby withdraws its recommendation for the reappointment of Regent Farolan to the Board of Regents. We enjoin Regent Farolan from making any such further statements which can compromise the reputation and the goodwill of the University.