Hits and misses in UAAP

WEEK Two of the UAAP men’s basketball season saw one playdate called off due to typhoon ‘Ferdie,’ but the heavy rains have not cooled down the hottest players in the college league.

After what he did against Ateneo on Thursday, the former benchwarmer will surely be a marked man. The 6-3 forward scored 21 points including 13 in the third quarter to lead University of Santo Tomas to a 71-70 win over four-time defending champions Blue Eagles in only his second game in the league after sitting out the entire 2011 season due to a fractured right ankle.

Foul trouble limited him to nine points in a loss to UST, but you can't expect the league's premier center to be contained for so long. True enough, Slaughter bounced back with a monster all-around effort last Sunday against National University, scoring 14 points to go 13 rebounds, five assists, three blocks and a steal. His 12 first-half points set the tone for the rout of the Bulldogs. 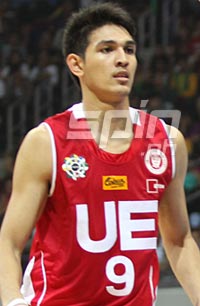 University of the East may have lost, again, to La Salle on Thursday but Santos emerged as one of the few bright spots for the Warriors. He had a double-double effort of 14 points and 14 rebounds (including 10 offensive boards) while adding two blocks in the Red Warriors’ 59-67 loss to the Green Archers.

His team had a cold shooting game against La Salle, but second-year player Tolomia was spot-on in the clutch. The former member of the 3-on-3 basketball team to the 2010 Youth Olympics converted a long jumper with 47 ticks left to lead Far Eastern University to its second consecutive win and the solo lead by beating La Salle, 48-46.

In his second game in the UAAP, Teng lifted the Green Archers to victory once again on Thursday in their 67-59 win over University of the East. A lethal five-point burst in the fourth quarter quashed the Warriors' upset bid and Teng finished with 16 points in the game.

The defending champions saw a 19-point lead in the first half slip away and lost by one point against University of Santo Tomas, 71-70 last Thursday -- the kind of fold-up you don't expect from an experienced team like the Eagles. 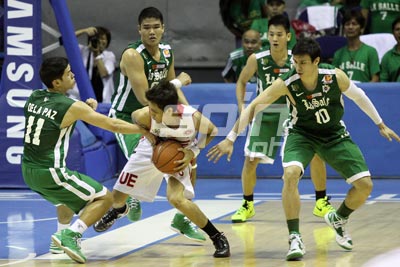 All UE Red Warriors not named Sumang or Santos

Roi Sumang has been averaging 20.5 points for UE following a 20-point outburst against La Salle last Thursday. But with the exception of Sumang and Adrian Santos, no other Red Warrior has yet to step up for coach Jerry Codinera since the start of the season.

The Bulldogs were the preseason favorites and had a rousing debut against UE. But in only its second game of the season, NU crashed back to earth with a loud thud when the Bulldogs were dealt an 89-65 beating by Ateneo. It will be interesting to see how NU will respond from here.