Do or die: Title shot at stake as Maroons, Archers face off one more time

LA Salle and University of the Philippines face off for one final time for the right to face Ateneo in the UAAP Season 84 Finals.

The Green Archers and the Fighting Maroons collide at 6 p.m. on Friday at the Mall of Asia Arena.

It's shaping up to be an intense duel all the more after the third seed La Salle forced the decider with an 83-80 victory.

The Archers are aiming to return to the championship series for the first time since 2017, while the Maroons are motivated to match their preseason hype and arrange a title clash against the Blue Eagles.

Things to know ahead of Friday's win-or-go home duel.

LET NELLE LEAD: Evan Nelle chose the right time to have his best game of the season, lighting up for 26 points, seven assists, and six rebounds in La Salle win on Wednsday. The Green Archers need the 5-foot-10 playmaker to sustain the solid play if they want to make it through to the finals.

ONE MORE GAME: With pro leagues here and abroad knocking on his door, Justine Baltazar is keeping his sights on the present as he wants to keep his collegiate career going as long as he could. Averaging 12.9 points, 11.0 rebounds, 3.0 assists, and 1.0 blocks for this campaign, the Kapampangan forward will once again be the shining light for La Salle in its quest to return to the finals. 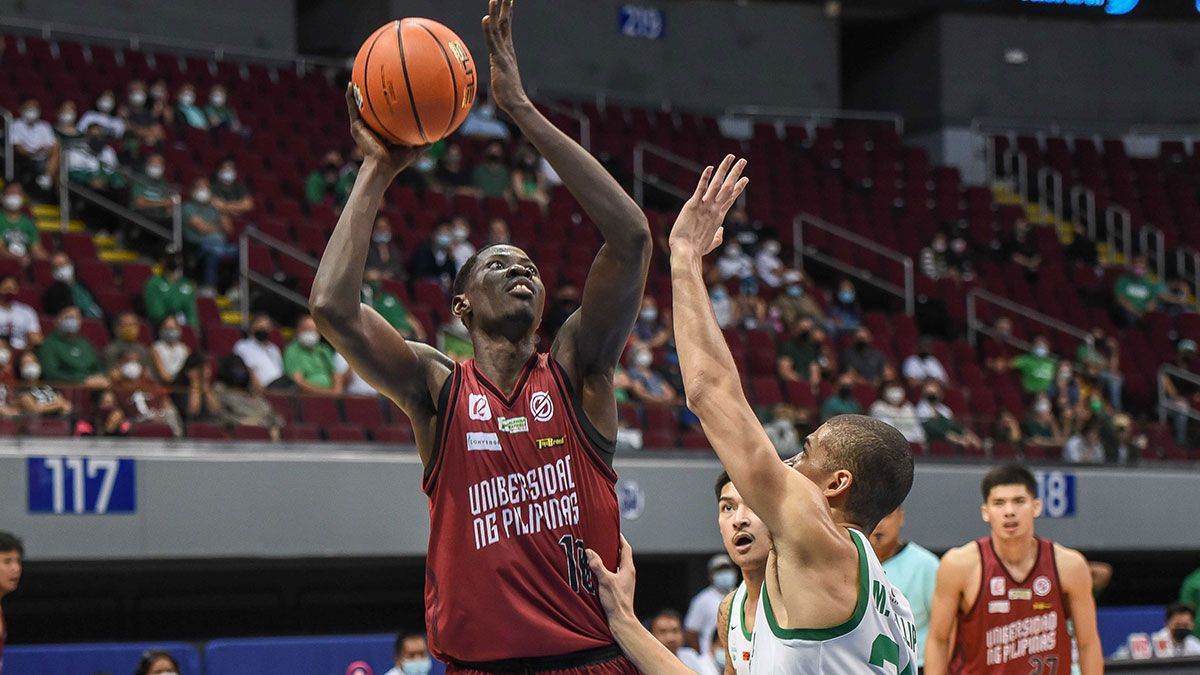 Malick Diouf and the second-seeded Maroons hope to stop the No. 3 Archers this time.

DOMINATING DIOUF: Malick Diouf has really picked his game up late in the season and has really provided UP the steady presence it needs down low. The Senegalese center continued to show that in the last game, where he poured 18 points and 20 rebounds to keep the Fighting Maroons afloat. If he could sustain that, expect him to also give headaches to the opposing frontline.

WILL CJ PLAY?: CJ Cansino's presence was sorely missed by UP in the last defeat against La Salle. The 6-foot-2 guard has been a sparkplug off the bench all season long for the Fighting Maroons, posting 9.3 points, 3.8 rebounds, and 1.1 assists, but a bone bruise on his right knee forced coach Goldwin Monteverde to desperately get those numbers from the likes of Gerry Abadiano and Brix Ramos. The question now is will Cansino be cleared to play come Friday?

PLAYER TO WATCH: Ricci Rivero scored 18 points to lead UP but shot a horrendous 5-of-18 shooting from the field. The senior guard must find a way to be more effective in Game Two if the Fighting Maroons want to make it through and arrange a Finals date against Ateneo.