A DAY after the biggest moment of Mac Belo's basketball career, it has emerged that the Far Eastern University star was awarded the wrong trophy when he was named MVP of the UAAP Season 78 Finals on Wednesday.

The error was first made public by CNN's Mico Halili, who was also the color commentator for ABS-CBN's coverage of Game Three. He posted a photo on his personal Twitter account showing the Finals MVP with the second runner-up trophy that was supposed to go to Ateneo.

The 'wrong trophy' was obviously passed around, with Spin.ph photographer Jerome Ascano also shooting a photo of TV host and comedian Vice Ganda, an FEU alumnus who went to the court to join the team’s celebration, posing with the same second runner-up award.

Well, it has become clear photographers who covered the Game Three thriller, and Belo himself, were aware of the error. According to Ascano, the lensmen initially asked Belo to pose with the trophy facing forward and, upon noticing the wrong inscription, asked the FEU star to turn the trophy around again.

But by then, a lot of the photogs, Ascano included, had already taken shots of Belo with the wrong trophy, a copy of which we're running now.

According to Spin.ph sources, UAAP officials also asked TV coveror ABS-CBN not to cover the awarding of the Finals MVP award so as not to lengthen the coverage of the error.

UAAP secretary treasurer Ronnie Dizer of host University of the Philippines admitted organizers left the Finals MVP trophy at the school, forcing them to stage a 'symbolic awarding' using the second runner-up trophy.

Dizer also insisted there was no malice involved in the trophy switch.

Dizer, however, said they will give the Finals MVP trophy to Belo as soon as possible, especially after the photo of Belo having the wrong trophy went viral on social media. 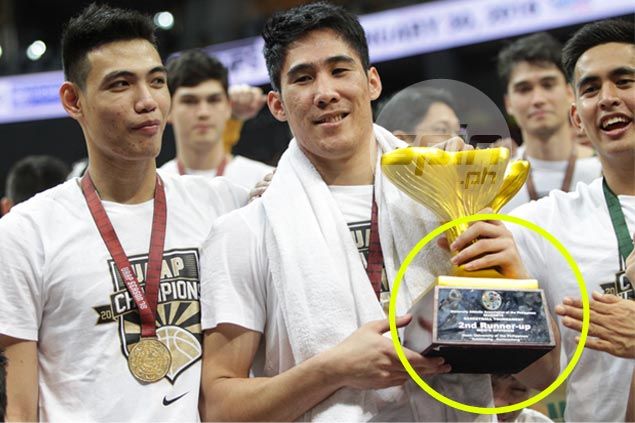