Coaches give NU Bulldogs the edge over FEU in individual match-ups in UAAP Finals. Agree?

NATIONAL University and Far Eastern University give the UAAP Finals a fresh look, fighting it out in the first championship series in the college league in 12 years without an Ateneo or a La Salle in it.

The two teams knocked off the perennial finalists as lower seeds - NU became just the second fourth seed in history to reach the finals by ousting Ateneo while FEU ended the reign of La Salle - and have a lot more in common than meets the eye.

Both teams also took the same path to get to where they are. Orphaned by their superstars in Bobby Ray Parks and Terrence Romeo, respectively, the Bulldogs and Tamaraws have preached team basketball this season and have been reaping the rewards since.

Who has the advantage? We asked two coaches: Eagles mentor Bo Perasol, whose team failed to live up to expectations after winning 11 of their 14 elimination games; and San Beda tactician Boyet Fernandez, who, despite being in the NCAA, has been following the UAAP scene.

In a battle between squads with contrasting offensive styles, it’s the one that dictates the tempo that has the edge, both coaches believe.

“If it’s a high-scoring game, FEU prefers that, but if it’s a low-scoring one, NU has an advantage,” Fernandez said.

FEU swept its head-to-head matchup against NU in the regular season, winning in the first round, 71-62, before repeating in their second encounter, 74-70.

But it seems the Bulldogs, aiming for their first crown in six decades or since 1954, have the edge man-for-man.

Iñigo has been steady for the Tamaraws, having averaged 7.1 points, 3.6 boards, and 2.9 assists in the eliminations, but he is going to be up against a veteran counterpart in Alolino, who led the Bulldogs in the elims in scoring with 12.3 points, along with 3.9 rebounds and 2.4 assists.

Tolomia stepped out of the shadows of Romeo and RR Garcia and has embraced his role as the Tamaraws’ go-to guy, emerging as the team’s second-leading scorer with 15.2 points on top of 4.4 boards, 3.4 assists this season.

But standing in front of him is one of the league’s best defenders in Javelona, who earned the tag 'Kiefer Stopper' after forcing Ravena to bleed for every point against NU. As a result, the Ateneo superstar shot a horrendous 25 percent (25 of 100) from the field in four games against the Bulldogs this season.

Javolona is also an offensive threat from long range, averaging 5.9 points, built around a 37-percent clip from beyond the arc.

Advantage: “Tolomia, but if Javelona can defend him, then equal,” Fernandez said.

It seems Belo has the edge. Not only did the Southeast Asian Games gold medalist finish third in the league in scoring with 16.1 points to go with 7.1 rebounds and 2.5 assists, but the mythical team member is oozing with confidence after hitting that right-wing triple that broke the hearts of the Ateneo faithful in the semifinals.

Khobuntin has also been solid skippering the Bulldogs, putting up averages of 8.4 points, 7.4 rebounds, and 1.4 assists in the first two rounds, but has his work cut out against the man-of-the-moment Belo.

Advantage: “No clear advantage in terms of position and talent,” Fernandez insisted.

Both foreigners are the their team’s respective anchors on defense, but the Cameroonian Aroga has been the more dominant after coming up with averages of 10.4 points, 9.1 boards, a league-best 2.2 blocks, and 1.4 assists, compared to the American Hargrove’s 7.9 points and 6.1 caroms.

Advantage: “No clear advantage; both are playing well,” Fernandez insisted.

“Hargrove has to hold his ground not only against Aroga, but also (another Cameroonian in Joel) Betayane,” Perasol said.

Both teams also boast of deep benches. The Tamaraws have Roger Pogoy, their sixth man and third-leading with 8.5 points along with 5.9 rebounds, and two assists; and two reliable big men in Russel Escoto and Raymar Jose.

The Bulldogs, on the other hand, have shooters in Jay Alejandro and Rev Diputado and Aroga’s dependable backup in Betayene.

“Their respective supporting casts will also be key,” Perasol said.

Both coaches refused to make predictions, but expect a classic battle.

“They both deserve to be in the Finals,” Fernandez said. “It’s going to be a classic matchup.” 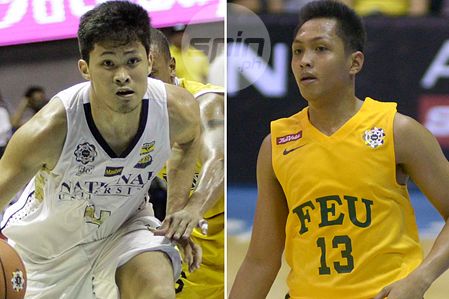