SPORTING a headband for the first time this season was not a fashion statement for Ateneo swingman Thirdy Ravena.

Ravena wore a headband actually owned by Adamson’s Jerrick Ahanmisi to protect a cut on the side of his head that took four stiches to close after a collision with Paul Varilla during their match against University of the East.

The cut certainly didn’t affect Ravena’s play on Wednesday against University of the Philippines, where the Blue Eagles guard put together his best game this season with older brother Kiefer watching from the stands.

The young Ravena had a career-high 22 points to go along with his 10 rebounds as the Blue Eagles put together their first winning streak of the season behind the 79-64 win over the Maroons.

UP coach Bo Perasol, who in the previous three years coached Ateneo but lost the chance to have Thirdy on his final year due to academic issues, said he was no longer surprised with how Ravena played.

“I’d say that had he played for me last year, that should have been his game already,” said Perasol. “I think he could have helped us last season. He really has the potential to do that, even more than that."

While his brother shot a consistent 7-of-10 from the field, Kiefer said what impressed him the most was a chase down block he pulled off during the game against Javi Gomez De Liano in the fourth quarter.

The older Ravena now hopes that Thirdy will pull off another stunt.

“Inaabangan ko na ‘yun matagal na. I want to see him slam one. I’m waiting for that. Hopefully, it comes out,” said Kiefer.

Thirdy said he was definitely inspired by the presence of Kiefer in the stands although he knew his older brother monitored his games in the times he spent overseas. 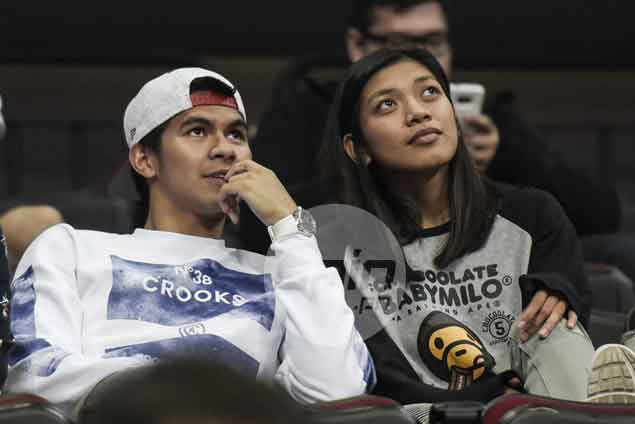 Thirdy now hopes the Blue Eagles will continue to improve heading to their final game of the first round of the eliminations - a marquee match against archrival La Salle on Sunday.

“It was a good game for us especially nung huli na na-execute namin ‘yung kailangan naming gawin," said Thirdy. "We need to continuously improve. Kahit panalo, we need to improve because we also did some things wrong.”