For a change, FEU relies not on individual skills but on team play to achieve success

FAR Eastern University has won several UAAP championships and produced a long line of hardcourt heroes in the process, from Turo Valenzona to Glen Capacio to Johnny Abarrientos to Vic Pablo to Arwind Santos and, just last season, RR Garcia and Terrence Romeo.

The Tamaraws are back in the finals this season, but this team stands in stark contrast to past FEU sides simply because it is truly a team.

Bereft of the college superstars that adorned its lineup over the years, the Tamaraws made it back to the finals not so much for individual skills but more for selfless play and team ball which coach Nash Racela had espoused since he took over the team last season.

That was none more apparent than in the 67-64 win over La Salle in their do-or-die game on Wednesday night when the biggest name in the FEU lineup, Mike Tolomia, made his biggest play of the game not with a shot but with a pass that set up Mac Belo for the game-winning three-pointer at the buzzer.

“Yun lang naman ang sekreto namin: we follow the system and philosophy of the team. Every player knows the value of one another when they are on the court,” said Racela, who lost his starting backcourt of Garcia and Romeo before the season started.

But the Tamaraws' success this season has inevitably given rise to comparisons between this team and last year's side, which had Romeo winning the league MVP award but taking no less than 332 attempts during the season while making 38 of 150 shots from beyond the three-point arc.

In contrast, this Tamaraws team which advanced to the finals opposite National University relied mainly on two players in Tolomia and Belo who rarely veered away from the team concept.

That was the reason Tolomia, the ball placed in his hands with the game on the line against the Green Archers, strived not to make the shot but to make the right play.

Tolomia’s efforts did not go unnoticed by his coach.

Racela, in fact, couldn't emphasize enough how pleased he was to see Tolomia make the right decision for the sake of the team instead of trying to be the hero.

“The last play was really designed for Mike Tolomia, but in the end, he made the most important decision of his basketball career. Di niya pinilit pero binigay niya kay Mac Belo,” said Racela.

Manotoc also said Racela's post-game statements captured the essence of the game for the Tamaraws.

“Sabi niya: ‘I commend the pass more than the shot… The fact that he had the presence of mind and the trust in his teammates to make the pass, to me that’s commendable.' Ako, hindi ko binabale wala yung ganung soundbyte na bibinigyan niya ng importance yung ganun. 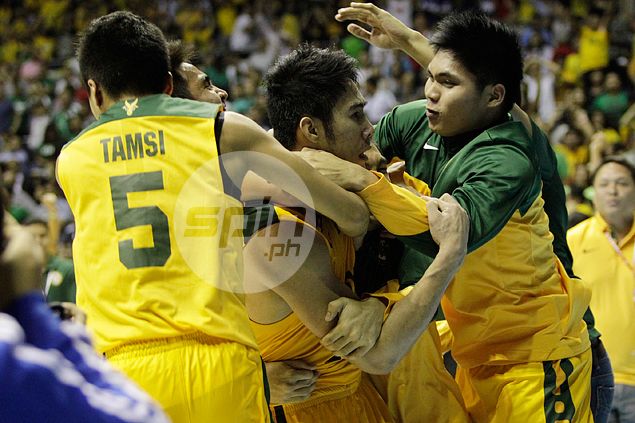