CHICAGO - With a 10-3 record entering their final game of the UAAP men's basketball elimination round on Wednesday, the Ateneo Blue Eagles are sitting at a very unique spot.

Already assured of both a Final Four ticket and a twice-to-beat advantage, Ateneo controls its destiny and can choose who they want to play in the semifinals.

A win over Adamson makes Ateneo the No. 1 seed and arrange a potential showdown with a very dangerous La Salle team.

[READ: How Ateneo can get top seed in Final Four]

A loss to Adamson slides the Blue Eagles to the No.2 seed, a ranking that will seal a showdown against the NU Bulldogs.

You don't have to be Einstein to figure out that Ateneo's path to the finals will be an easier ride if they lose to the Falcons.

"I don't play that game," he told me over the phone when I brought up the theory of tanking versus Adamson and how it will align Ateneo in a better strategic position to win all the marbles in the UAAP's Season 85.

"Credibility, my own as well as that of my players and the institution we represent, matters to me. I'm a purist and all my teams play games to win it and entertain the fans," Baldwin emphasized.

As allegations of game-fixing have stained the names of a few coaches across several leagues, coach Tab continues to remain beyond reproach.

"That's why I never get approached (by shady gambling characters) because they know I don't participate in that kind of nonsense and criminal activity that desecrates our game."

IN TAB WE TRUST, INDEED.

Over at rival league NCAA, a controversy occurred last week when powerhouse Letran lost a stunning 87-71 decision to a broken 7-11 JRU team on the final day of the elimination round.

Had the Knights won, they would have gotten the No. 1 seed and arranged a Final Four pairing against the excellently-coached San Beda, a team that already beat Letran twice this season.

"Medyo nag-relax lang kami," Letran coach Bonnie Tan said while dismissing claims that they chickened out against the Red Lions.

[READ: Did Letran 'pick its opponent' in Final Four?]

Over at the more pristine UAAP, Ateneo will not duck anyone. The Blue Eagles live with the mantra that in order to be the best you have to beat the best.

You can't let another team fight your battles, right Bonnie?

"It's going to be a tough road, regardless, but we are ready for whoever is in front of us," coach Tab emphasized.

"We've had some rough patches early on but I am elated at how my team has matured over the season and how the bench has developed from a non-productive unit to a key component during our five-game winning streak."

Against rival UP, which is led by an otherworldly talent in Carl Tamayo, Ateneo showed grace under fire and poise under relentless pressure to weave a 75-67 victory last Saturday at the Araneta Coliseum.

Beating the Fighting Maroons once in the championship round will be a dream, twice a miracle. 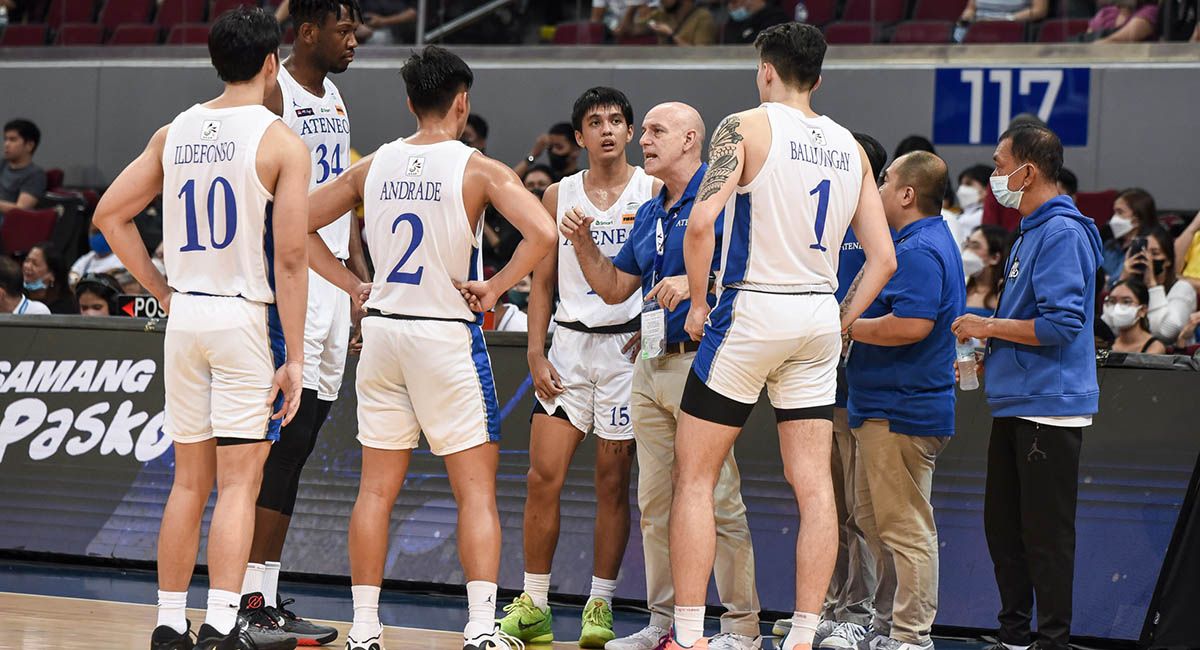 But Baldwin believes that based on their analytics and their ability to execute their 15 game goals each outing, the Blue Eagles have a robust chance at returning to championship glory.

For now, though, Adamson is in the calendar.

And the Falcons will have to be taken care of like it's business as usual.

Tanking is not on the agenda.

Just winning and preserving the integrity of amateur sports.