Remember this strange end to the FEU vs La Salle finals in 1991?

FRANZ Pumaren holds the honor of having won the most UAAP championships won for La Salle with five, including the four-peat from 1998 to 2001.

But seven years before he got the nod to coach his alma mater, his older brother Derrick steered the Green Archers to three straight titles with a team led by Jun Limpot and Johnedel Cardel completing the hat-trick in UAAP Season 54.

It was one of the most bizarre finishes to a season in Philippine college basketball, and a moment that flashes back into everyone's consciousness as Derrick Pumaren marks his return to the Green Archers for the upcoming season.

La Salle won the first-round pennant and subsequently got the top seeding at the end of the eliminations with its 12-2 card. The Green Archers went on to beat Far Eastern University, 80-77, before 20,000 fans in attendance at the Araneta Coliseum.

But when the buzzer horned and confetti started raining down from the Big Dome rafters, Tamaraws team captain Vic Pablo put the game under protest on the grounds of a "technical error" that happened in the final 2:22 of the game after La Salle guard Tony Boy Espinosa was whistled for his fifth foul. 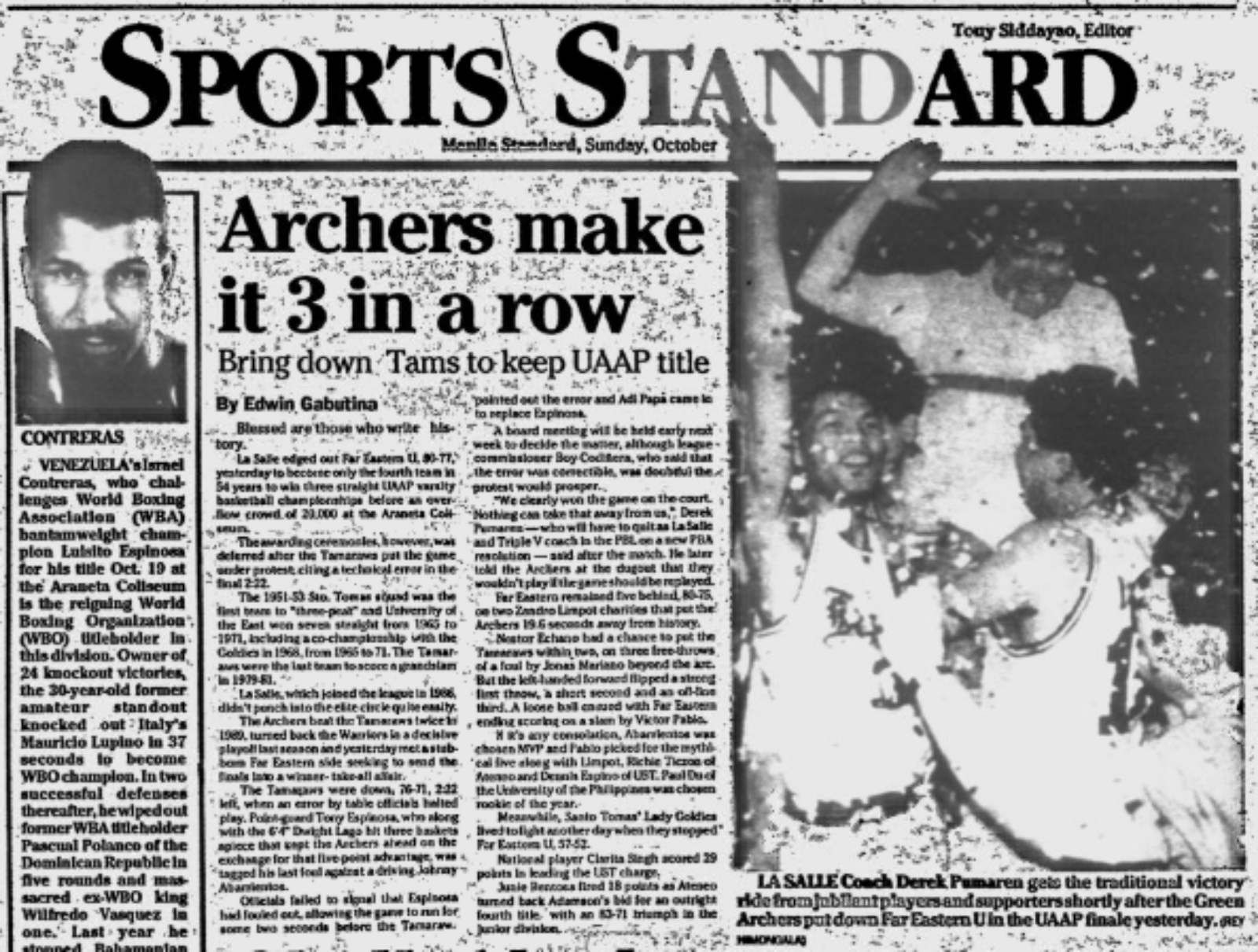 With the Green Archers leading, 76-71, Espinosa was called for his fifth foul on Johnny Abarrientos. But the referees failed to send the La Salle guard out of the game, letting some seconds run down before Adi Papa was sent in as his replacement.

That error became the grounds for FEU to contest the La Salle victory, leading to the awarding ceremony being deferred even after Pumaren had already enjoyed the traditional victory ride from his players.

"We clearly won the game on the court. Nothing can take that away from us," Pumaren was quoted in the match report of Manila Standard's Edwin Gabutina.

A day later, the UAAP board upheld FEU's protest, citing the then-Fiba rule No. 81 which stated that La Salle clearly violated. The rule read: "A player who has committed five fouls, either personal or technical, must automatically leave the game."

The board then nullified the game and ordered a replay, set on Oct. 12. 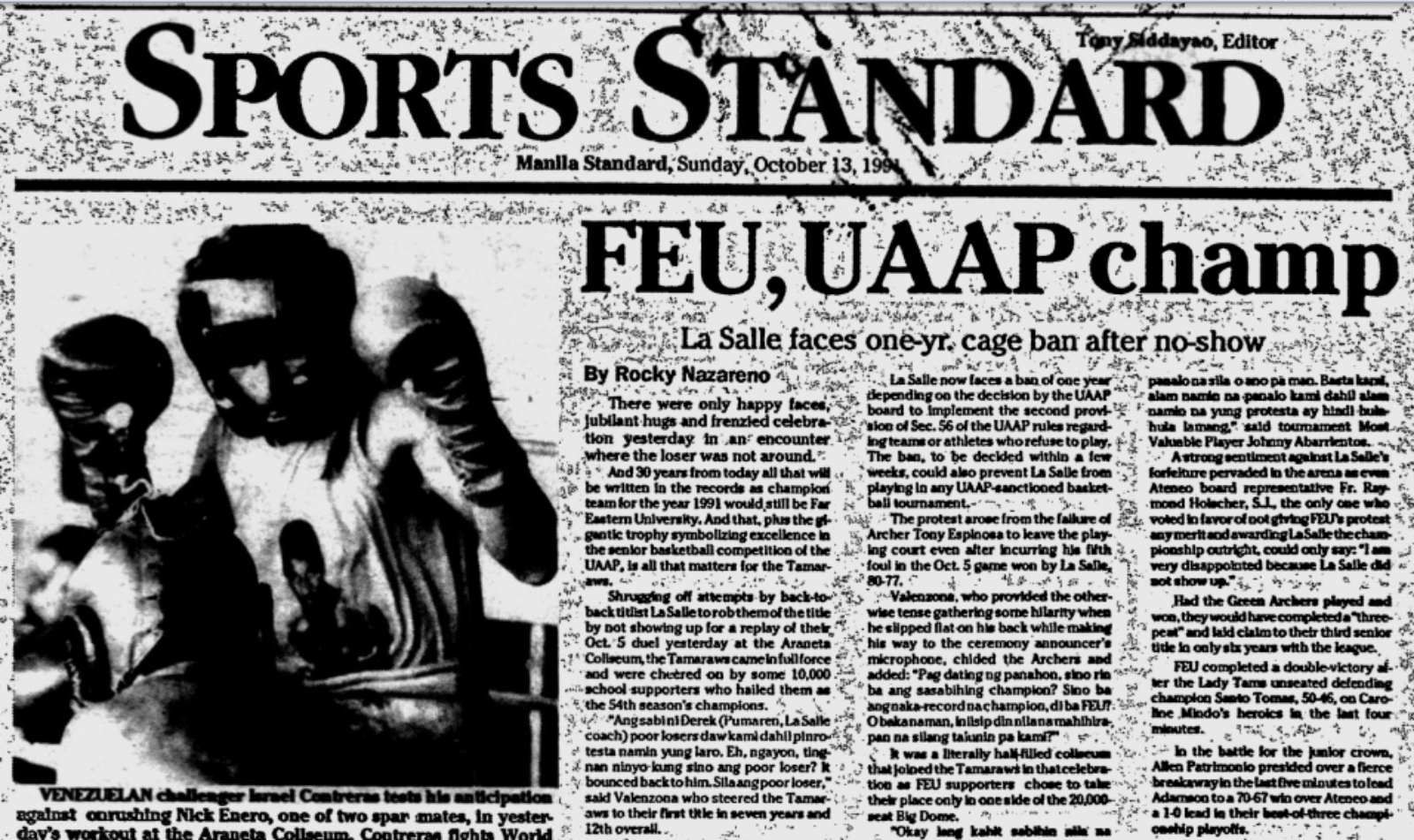 It was a bitter turn of events for La Salle, as related by senior board member Noel Reyes.

"It would not be truthful to say that we are happy with the decision. We are not happy. You can pretent the game was never played," he said.

Over the next few days, the Green Archers weighed their next move. When tip-off came, there was no La Salle player, or any fan for that matter, in sight. The UAAP board then awarded the championship to the Tamaraws, one which the Morayta side graciously accepted. 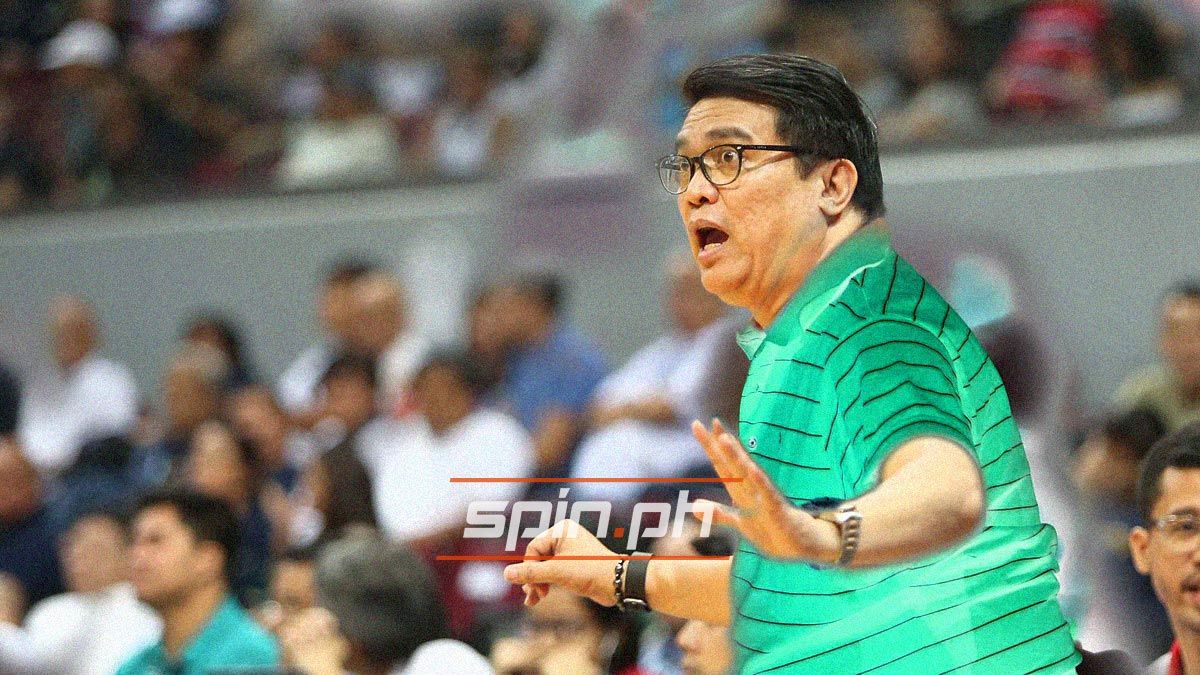 Yet it's still a disappointing turn of events, especially for Ateneo board representative Fr. Raymond Holscher, SJ - the only board member who voted against FEU's protest and the move to order a replay.

"I am very disappointed because La Salle did not show up," he said.

The strange finish didn't stop the multi-titled Valenzona from triumphantly addressing the fans of the green-and-gold.

True enough, the records now show that the 1991 UAAP crown, which La Salle won on the court but ultimately gave up after its no-show in the replay, was given to FEU.

The nullified game, it turned out, was also Pumaren's last at the helm for the Green Archers as he moved on to the PBA and coached for Pepsi, Sunkist, Sta. Lucia, Purefoods, FedEx, and Talk 'N Text.

He returned to the UAAP, this time for his alma mater University of the East, in 2014.

Twenty-nine years since that controversial game, Pumaren will be back in green-and-white, not only to redeem himself from that debacle but also to bring the glory back to the Taft-based school.