Siot Tanquingcen takes self out of consideration for UP Maroons coaching job. Find out why

THREE-TIME PBA champion coach Siot Tanquincen said on Thursday he has taken himself out of consideration for the vacant coaching job of the University of the Philippines Maroons.

Tanquincen was one of only two coaches extended invitations for an interview by a UP selection committee led by team manager Dan Palami. The only other invitee was former Barako Bull coach Bong Ramos.

He said previous commitments has prompted him to decline the nomination.

Tanquincen, a former shooting guard and later assistant coach of the University of Sto. Tomas Tigers, said he believes UP's current pool of coaches is capable of turning around the long-suffering program.

“UP has a long line of top-notch coaches coming from their pool. Yun din ang isa sa naisip ko that’s why I had reservations about the job,” he said.

“Pero sabi ko nga, it’s up to management to pursue whatever direction the team needs to take,” he added.

Meanwhile, Tanquincen hopes to pass on some of the skills he has gained from decades spent as a player and coach at the Basketball Learning Center set at the CCF Center along Ortigas Avenue. 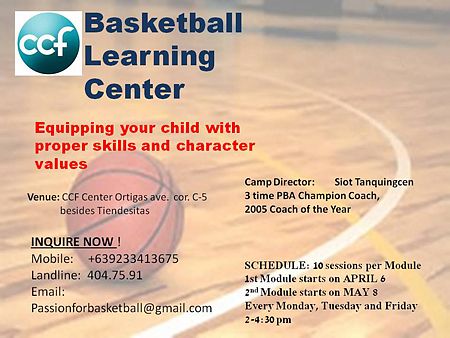