COLUMN: Seeing Ateneo blue on the horizon for Kyle Gamber

NEW YORK - Kyle Gamber was first introduced to me back in December 2021, vicariously through YouTube.

He is 6-foot-4 tall, and despite having just 165 pond in his frame, is strong as a bull. He also has more moves than a game of chess.

I was kind of impressed, but not quite totally because YouTube highlights can be manipulated in a way where the content provider exaggerates the highlights while masking the lowlights.

Intrigued, I embarked on a 15-hour drive this past weekend from Chicago to Manalapan township in New Jersey where Kyle took part in the RJP Sportsfest at a multi-court facility named Sportika.

There, I saw Kyle live in action.

And I can now tell you this with certainty: Those videos about him on YouTube do not give the kid justice. They barely even scratch the surface to depict how good this 17-year old is.

In one of his appearances in the Under-20 bracket, a game I witnessed from the opening tip until the final buzzer, Kyle swished five 3s, a pair of floaters, and a dizzying array of mid-range jumpers.

He dropped a sizzling 32 points and sprinkled it with a healthy chunk of rebounds and nifty assists.

Kyle Gamber is simply amazing. Fluid, he is smooth as fine scotch. He is also a terrific play maker and a knockdown shooter who would require multiple coverages to contain.

Most importantly, Kyle is an all-around nice kid with an All-Star upbringing. 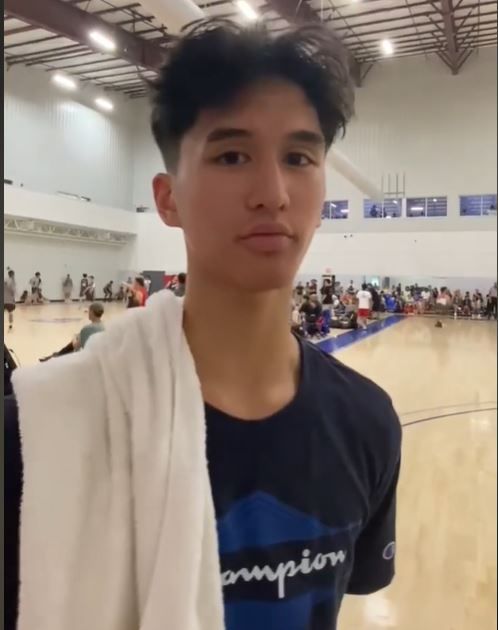 Having said that, my superlatives and I are officially all-in. Apparently, I'm not alone in the bandwagon.

Kyle has gotten multiple offers from Division 1 and 2 schools in the NCAA, but with his senior year still looming, no commitments have been made.

Heavyweight schools in the UAAP have also been sniffing at Kyle's Nikes. In that footrace, coach Tab Baldwin is ahead of the pack because he never lags behind when it comes to recruiting talents. Which is why the Blue Eagles are a dynasty.

Drawn to the Jesuit school's charm and winning track record, Kyle, meanwhile, is also endlessly fascinated with the idea of playing for the Blue Eagles.

All this mutual admiration could just be a playful ritual not rare in a courtship process.

But then again, it could also be the prelude to a marriage that will lead the prosperity of more titles for Ateneo.

So the message needs to be sent to the rest of the UAAP field.