A PROVINCE that prides itself at this time of year for its giant lanterns expects another giant of a different variety to make a splash in the future.

Meet Jeremaiah Joy Sandalo Pangalangan, a 15-year-old kid from Pampanga who already stands 6-foot-7 and this early is being groomed to be a basketball star in the mold of the province's other cage jewels.

Spin.ph recently caught a glimpse of the prodigious kid under the care of Pampanga vice governor Dennis Pineda, who incidentally discovered and nurtured the careers of current PBA stars like former MVP Arwind Santos and Calvin Abueva and young guns Ian Sangalang and Ronald Pascual.

Pangalangan’s dad, Abel, told Spin.ph that he is happy with how Pineda has been developing his son.

“Hard training talaga siya dito. Puro drills at saka basketball,” said the elder Pangalangan inside the Pampanga Sports Complex in the capital town of San Fernando where his son and other promising players in Pineda's stable are quartered and made to undergo regular training.

According to Pineda's camp, Pangalanan, who they hope to grow as tall as seven feet, if not taller, is already committed to go to La Salle for college.

To develop Pangalangan's skills, the youngster from Angeles City undergoes spartan training under the supervision of former San Sebastian Stags coach Allan Trinidad, who pays particular attention to the kid's footwork and dribbling skills to set him apart from other tall homegrown cagers.

So tall is Pangalangan that former PBA star center EJ Feihl was astonished to talk to a 15 year old at eye level.

“Malaki tong batang to. Baka mas maging mas matangkad pa sa akin to,” said the first and only seven-foot Pinoy player to have played in the PBA.

Trinidad bared that Pineda has designed a training regimen for Pangalangan and a handful of other Pampanga-born players under his care. 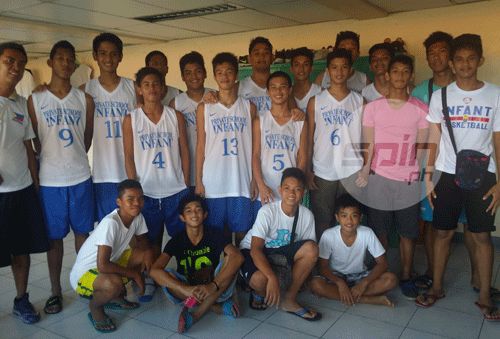 Trinidad bared that a lot of UAAP and NCAA teams have already been asking about Pangalangan.

Among those in the stable is forward Darryl Pascual, who is set to debut for the La Salle Green Archers in the UAAP.

Pangalangan is set to make his debut in the coming Palaro Pambansa in Davao Del Norte, where he will spearhead the bid of Central Luzon to snatch the basketball crown from Calabarzon.

Pineda, for his part, said he wants Pangalangan to be developed into an aggressive and taller version of Abueva.

And like Trinidad, Pineda believes that Pangalangan still needs to improve his athleticism and his overall skills.

Asked if he is looking at Pangalangan to be the first homegrown player to make it to the NBA, Pineda said he is hopeful.