IT was no surprise that Ateneo and La Salle athletes dominated an official list released on Tuesday by Twitter on the most tweeted about Filipino athletes for 2017.

What came as a surprise was the one at No. 1.

Ricci Rivero, a sophomore La Salle forward playing in only his first UAAP men's basketball finals, emerged as the most tweeted-about Filipino athlete for the year, according to Twitter.

The flamboyant forward's following on the micro-blogging site skyrocketed to 250,000 at the end of the Ateneo-La Salle finals, his @riccirivero06 handle no doubt getting a lot of online mileage after his heroics in a Game Two win by La Salle.

Kiefer Ravena (@kieferravena) placed fifth on a year when he finally made the jump to the PBA and the national seniors' team after a stellar collegiate career at Ateneo while his younger brother Thirdy (@ThirdyRavenaaa), hero of Ateneo's UAAP title conquest, came in 10th. 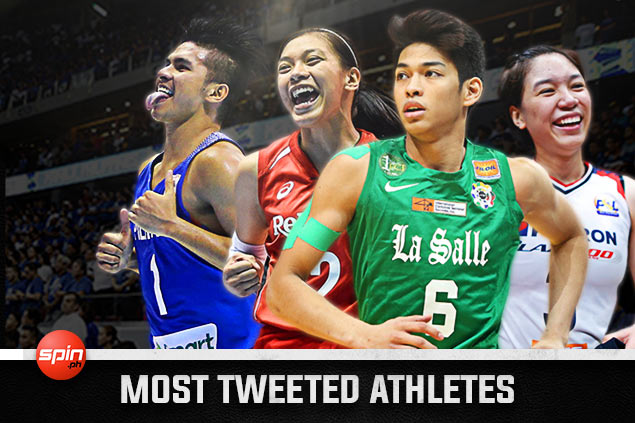 The popularity of the UAAP, and of course the Ateneo-La Salle rivalry, also manifested in the list of most tweeted sports-related hashtags where Ateneo's #OBF (one big fight) battle cry, La Salle's #animo chant, #UAAPSeason80 as well as #GoldandGloryAteneo made it to the Top 10.

However, the No. 1 on the list was the #NBAFinals, followed by #UAAPCDC2017 of the just-concluded UAAP Cheerdance Competition, and #PacquiaoHorn of the controversial Pacquiao-Horn fight.