JERON Teng ended University of the East's spirited bid for a famous victory with two pivotal baskets midway in the fourth quarter to power La Salle to the solo lead with a 67-59 victory on Thursday in the UAAP men’s basketball tournament at the Smart Araneta Coliseum.

The Green Archers collected their second victory in as many tries and, with Ateneo’s defeat to University of Santo Tomas in the first game, took over the early lead in a tournament where they hope to reclaim their status as a legitimate championship contender. 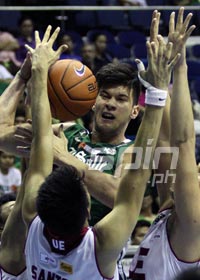 While La Salle coach Gee Abanilla is happy with to say perfect so far, he was quick to point out that the Archers are still a work in progress.

“We are very happy with a 2-0 record but it’s still a long way to go,” Abanilla said. “We are still trying to figure out what works and what’s not. But ultimately, we want to get better as the season progresses.”

Teng led the Green Archers with 16 points and her personally turned a slim 51-50 advantage into a six-point lead with a lay-up and a three-point play. A split of his free throws by Norbert Torres ended a 10-0 spurt to give La Salle a 61-50 advantage.

The Red Warriors, who kept the match close in the first three quarters, dropped to 0-2 and failed to repeat their upset win over La Salle in the Filoil Cup.

Jovet Mendoza and LA Revilla, who started off the crucial run with a three-pointer, had 11 points each for La Salle.

Roi Sumang had a game-high 20 points while Adrian Santos chipped in 14 points for UE.