PRIOR to the season, not a few thought Dela Salle's frontline will be all about Ben Mbala and nothing else.

It took a young homegrown talent to change that perception.

Star of National University's run to the UAAP Season 78 juniors championship, teenager Justin Baltazar has turned heads after just a few games with La Salle's seniors side while playing as a back-up to Mbala.

Head coach Aldin Ayo is obviously pleasantly surprised at the potential of Baltazar, who he considers this early as the future of La Salle and Philippine basketball as well.

Ayo is no doubt impressed with the 18-year old's potential and immense upside. 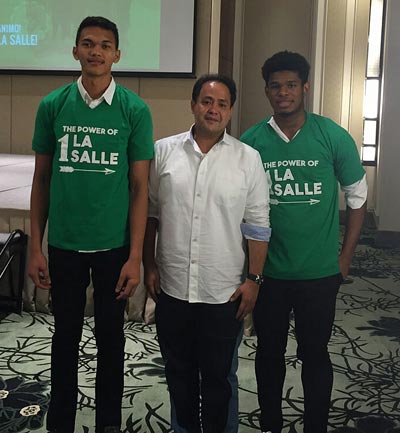 Baltazar is the latest talent to come out of the program of Pampanga vice governor Dennis Pineda, who has helped launch the careers of now PBA stars Calvin Abueva, Arwind Santos, and Ian Sangalang.'

Aside from Baltazar, other products of Pineda's program who are now with La Salle are Larry Muyang, Mark Dyke and reserve Jayjay Pangalangan.

Letran coach Jeff Napa, who coached Baltazar during his time with the National University Bullpups, said the kid is 'the real deal.'

“Maraming papahirapan yang batang yan. And for his size, sky is the limit for him basta maintain lang nya ang attitude at work ethic nya," Napa said. "He has a very bright future ahead of him."

Ayo, who won a championship in one season at Letran, isn't even looking that far ahead, saying Baltazar is already giving him a 'good problem' as far as the rotation at center position is concerned.