After being snubbed by major schools, Jerrick Ahanmisi is proving Franz Pumaren right

To think the younger Ahanmisi nearly missed playing in the UAAP.

The 6-foot-1 Fil-American guard initially tried his luck with major schools Ateneo, La Salle and National University, but never got to impress enough to merit a spot in their powerhouse lineups.

It was only last February when Ahanmisi decided to try his luck with the San Marcelino-based squad. Although obviously raw, Ahanmisi showed something in practice that got Pumaren's attention.

“The moment he stepped on the court, I saw a potential in him,” said Pumaren, who also had a hand in launching the collegiate careers of Joseph Yeo, Mike Cortez, Ryan Arana, Rico Maierhofer, JV Casio, LA Revilla and Don Allado.

“So I immediately asked him to join our drills,” said the outspoken five-time UAAP champion coach.

Adamson assistant coach Mike Fermin bared that Ahanmisi was not as impressive as he is now during the first few days of training camp with the Falcons.

“Medyo hindi pa ganun ka polished ang laro nya nun saka hindi sanay sa physicality pa ng mga Pinoy,” said Fermin. “But in an instant, he was able to grasp the system and was able to familiarize himself with the concept of what role he needs to play for us.”

“He was a diamond in the rough, but I knew he can be a very good player," said Pumaren, who is also a consultant with GlobalPort in the PBA. "Kaya tinutukan namin ng coaching staff."

“And I wasn’t wrong, Jerrick absorbed all the things we taught him fast. But what impressed me so much is his very high basketball IQ. He knows what to do and what not to do with the just by reading the defense of our opponents.” 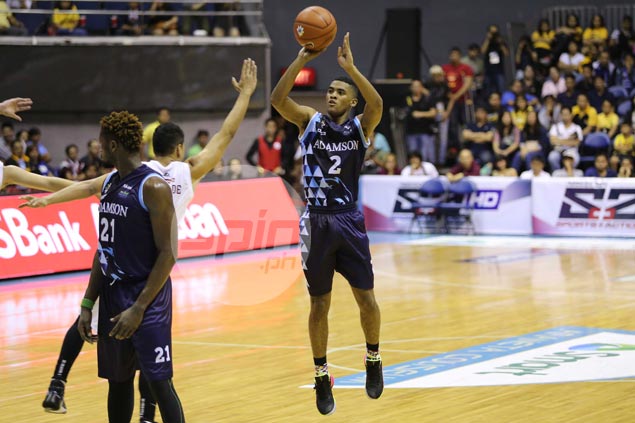 Ahanmisi repaid Pumaren's faith in the a big way, scoring 28 points behind six three-pointers when the Falcons opened the UAAP season with a 104-85 win on Sunday.

Being in basketball for more than three decades, Pumaren knows Ahanmisi will be a marked man from hereon. But he believes the Falcons’ next games will truly define Ahanmisi.

“I’m sure napanuod na siya sa first game namin and he will be scouted very well,” said the former PBA star. “But I told Jerrick, we will guide him through and through. All he needs to do is focus on the task at hand, aalalayan namin siya.”

“If he sticks to his humility and hardwork, he can go places. Look at his brother Maverick, he is fast becoming to be a formidable force in the PBA.”