Is college star Jeron Teng good enough to stand out in PBA? Coaches weigh in

JERON Teng has been in the news since he was a teenager, not only for his basketball genes but more for a memorable game in high school where he scored a then-record 104 points for Xavier School in a Tiong Lian tournament game.

The son of PBA and MBA veteran Alvin Teng only bolstered a growing reputation as a top PBA prospect in his five years in college, which he highlighted with two UAAP championships for La Salle including a Finals MVP-worthy performance in the just-concluded title game against Ateneo.

But now comes increased scrutiny as the powerfully built forward ended his college career and started preparing for the pro ranks, beginning with a stint in the PBA D-League where he is expected to be made the top pick overall in the December 20 draft.

Judging from reactions on our comments section in the wake of Teng's heroic performance in the last UAAP finals, fans have been more or less split about the La Salle star's readiness the pro ranks.

That's why we decided to toss the question to the people whose opinion carries more weight: veteran coaches.

Can Teng be a star in the PBA?

Most coaches we talked to feel Teng has a body that is PBA-ready, but doubt if, at 6-foot-2, he can be just as effective in his prefered three, four spots when he moves up to the pro ranks. That he managed to slip into the two spot late in his college career, they say, bodes well for the power-playing forward.

Like most coaches, Phoenix mentor Ariel Vanguardia also feels Teng must still work on his jumper in terms of range and consistency. He also has limited moves off the dribble, some coaches pointed out, saying Teng mostly relied on brute strength to get a shot off defenders.

But Vanguardia also sees a lot of upside in Teng's game, reason enough for him to forecast the La Salle star a guaranteed 'top three pick' once he entered the PBA draft.

“Jeron will be a sure top three pick,” said Vanguardia, a champion coach in the ABL who also coached in college with Jose Rizal University.

Vanguardia based his conclusion on the fact that Teng is a 'proven winner' who is 'fearless' on the floor. The King Archer, he added. is also a complete player because he has the skills to play good defense.

“He is a proven winner and he’s got an attack mentality. He is also fearless,” said Vanguardia. “He needs to polish some more his shooting especially from threes. But he is a two-way player. He can defend also because of his quickness.”

“Una namang importante sa PBA kasi is the strength of your individual defense," said Perasol, who had an impressive stint as coach of Coca-Cola (later Powerade) in the PBA before coaching against Teng in his three years in charge at Ateneo.

"He has what it takes to defend. It is just not highlighted in college basketball kasi most of the time, if you have a big man like (Ben) Mbala or dati like (Norbert) Torres and (Arnold) Van Opstal, meron kang mga shotblockers." 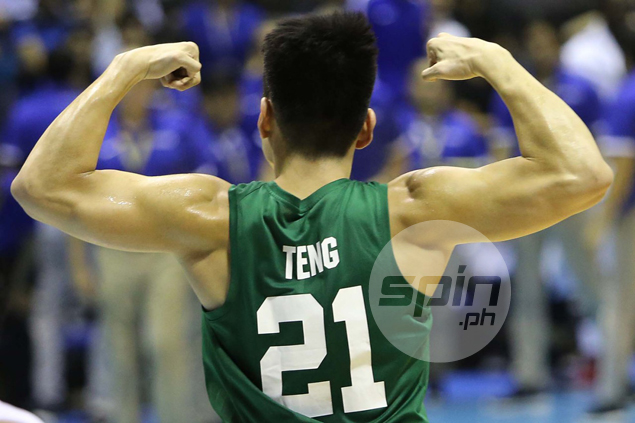 Teng's scoring also takes the attention away from his impressive defense, Perasol added.

"If you are being tasked to score a lot of points, minsan talaga makakalimutan mong dumepensa," Perasol said. “But come the PBA, he would really need to defend. But he is capable of defending one-on-one and team-wise kasi malakas ang katawan, mabilis, at athletic.”

That Teng has a 'winning attitude' is just a bonus, Perasol said.

“His confidence is sky high, he has the skills to muscle up short jumpers," he said. “Nakikita sa mukha niya na ayaw niya magpatalo. I think he can be one of those guys who can lead the way for a (PBA) team.

“He will be a big catch for any team,” he concluded.